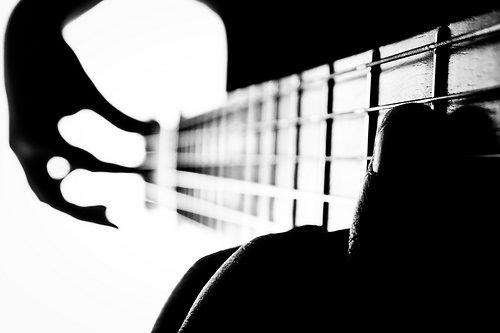 “The music takes me away…”

As with many of us, music provides a wonderful means of escape for me. No matter what mood I’m in, I can always find a song that helps “accentuate the positive” or “eliminate the negative.”  I can sing golden oldies, gospel songs, show tunes, pop hits or something I just made up, and find that I can get lifted out of myself momentarily.  The music takes me away.

Maybe that’s because I came from such a musical family.  Dad grew up in a home with guitars and banjos and accordions and lots of singing.  As he got older, he found something of a sideline singing in clubs and even backing up a few movie recordings.  I actually think he met Mom while stationed in England after World War II when he was performing in a local club.

After that it was mostly singing for friends, neighbors and family.  I never appreciated how good he actually was until I got older, but I have to admit, he was a talented guy. Whether playing his upright bass or Gibson guitar, he always loved to sing.  The five children – and especially the three oldest who probably benefitted from it more than the others – learned early on how to sing Mom and Dad’s favorites: The White Cliffs of Dover for Mom, and You’ll Never Walk Alone for Dad.

Only as an older man did Dad start singing in church.  He never attended through most of his young and middle years, but after retiring in the late 70s, that changed, and the old hymns he learned as a child found new life as he sang.  Even though I’d started playing the guitar at about age 12, it wasn’t til Dad was in his 60s that he actually ever heard me play.  But after that, every time we got together, we’d pull out guitars or sit at the organ and have a little sing-along.

He’s much older now, debilitated by Parkinson’s Disease, some dementia, and all the other ailments that go with being 85.  He’s been living in a nursing home for about a year; mom having died too young almost 20 years ago.  Since all of his family lives in other states, and he wanted to stay in rural Kansas, he spends the bulk of his time with the company of his co-residents.

I went to see him recently and, even though he’s hard to understand when he speaks, we had a nice couple of days together. Sometimes he would just sit staring off into space and, if his eyes were closed, you wouldn’t know if he’d fallen asleep or not. And once you get past talking about the family, what else is there to say? And so we sat in his room.  At his request, I had taken his old Gibson out to keep him company, and even though his hands couldn’t form chords anymore, he’d had that guitar for over 50 years, and it was a comfort he deserved.

On my first evening there, I pulled the guitar out and started tuning it.  I asked if he wanted to sing, but he said no.  So I just started playing some of the old songs: Just a Closer Walk with Thee, He Touched Me, The Green Green Grass of Home, and so on.  And little by little, he started singing with me. His eyes were closed and he was lying on the bed, but I couldn’t help wonder if perhaps the music took him back.  I’d keep strumming but stop singing, and he’d keep it up by himself.  Sometimes I’d ask what line comes next, and he almost always knew.  For a few moments, at least, he was his old self, singing the songs that had been with him for decades.  They just needed a chance to come out again, and when they did, the songs kept singing.

The other part of this visit was with my brother Michael, a couple of years younger than me.  He’d been suffering from cerebral palsy since he was about 18 months old.  He’d never walked on his own except in those early months.  Most of his life had been spent in a wheelchair.  His mind had never developed normally, either;  he wouldn’t know the difference if you told him a candy bar cost as much as a car.  Over the years he’d become legally blind, and by the time he turned 50, he too had been diagnosed with Parkinson’s disease.

As with the other older children in our family, he grew up with the music, and through that special grace that makes no sense to most of us, he could identify a song on the radio and tell you who was singing and join in, more or less.  He’d do the same around the house.  Of course, he had no pitch, and his words might be jumbled, but oh he loved his music.  When Dad played, Michael would be right there, singing along.  It was his escape, too.

And so, while we were at Dad’s house for the night, Michael sat in his old chair and we talked about music.  I went to the organ and would start playing a few tunes from memory.  No matter how poorly I played, I’d ask if he recognized the song, and he always did.  And if I sang, he sang along with me.

And so it struck me on this visit to my dad and my brother that music does more than lift our spirits or give voice to our joy.  It takes us to a whole other place, outside of ourselves. It moved Dad from the bed in his nursing home to a church service or a family gathering.  It moved Michael beyond his disabilities to a place where he was just like anyone else, singing along with the songs of his lifetime.

When I stand before God one day, there will be many things I will have to be thankful for in my life, but perhaps, when you get right down to what matters, maybe music will be the one gift God gave me and my family for which I will be eternally grateful.  And, if I have the chance, I’ll keep singing until time is no more.

Mark Davis is from Atlanta, Georgia.

Life is a succession of lessons which must be lived to be understood.