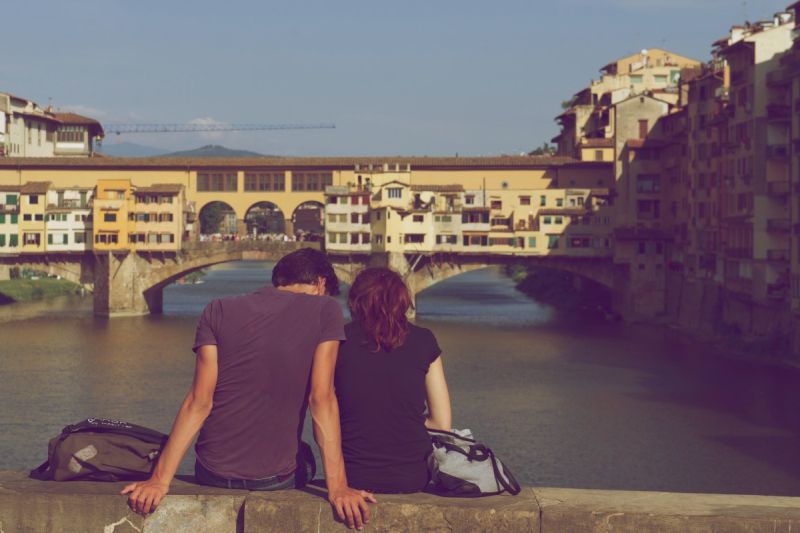 Marriage is a funny thing. Depending on how the marriages of our parents or friends’ parents have turned out, we all tend to look at the institution differently. I’ve even been known to say that I would marry anyone with dental insurance so I could get my wisdom teeth pulled out of my damn mouth. However, last night, I met the people who showed me how it’s done.

Working in a small bookstore in suburban New York, I don’t tend to meet too many stimulating people. In fact, sometimes shifts pass without a single customer. After about a half hour lull, a couple wandered in. I hesitate to call them elderly, because although they were 68 and looked it, they were obviously spry. Also I believe in karma, and I hope if I’m fit when I’m that age, I won’t be called elderly.

Anyway, after noticing the store was empty aside from his wife, who had immersed herself in the books, the man approached me with a smile and said, “Since you’re not too busy, I was wondering if I could maybe ask you for some advice, if it’s not too much trouble, dear?”

His voice was sweet, and definitely not North-eastern. It was too soft to be a New York grandpa kind of voice, because New York grandpas practically yell, and they usually call me missy, not dear.

I would find out that his name was Bill, and he was from southern Illinois. He and his wife, whose name I sadly did not learn, were on vacation, and stopped off the highway for a break as they were driving from Niagara Falls to New York City, which he assured me looked much closer together on his map than they actually were.

He asked your basic touristy questions — if he should book a hotel here or in the city, if it was worth it to take public transportation versus driving into Manhattan, and what attractions were worth the dough. After disappointing him with the news that Ground Zero is actually nothing more than a fenced in construction site and that cabs would indeed cost more than 5 dollars in most cases, he began to tell me about their trip.

Bill was retired as of this past April, and his wife has been retired since last year. When they were married over 30 years ago, they spoke of a trip that would take them around the perimeter of the country to all the cities of romance, the kind they saw in movies. He told me he’d never included Chicago or St. Louis in that list, because the cities that they’d been to were far less romantic than the ones that they never thought they’d see. His wife had made a list during their engagement of places she longed to see — Los Angeles, San Francisco, Atlanta, Philadelphia, and New York. They spoke together of the things they would do there, the pictures they would take, the kinds of restaurants they would eat at, the places they would explore. They would drive place to place and really soak in the country, because that’s the right way, they figured.

Bill promised his wife that someday, no matter what, the trip would happen. He even signed her a contract that they would take the trip before they were seventy, because in those days, he explained, when you were 70 you were as good as dead. Now, of course, a trip that takes this kind of time, money and planning was not going to come easily. In fact, Bill swears up and down that his wife completely forgot about the trip until his retirement day, when he came home and presented her with something: the contract.

Pulling it out of his wallet, he showed me the now frail paper to which he had signed his pledge to his love so many years ago. And now, standing proudly in front of me, he was doing it, taking her to all the places she’d seen in movies and loved and dreamed of going. He was more than proud, he was in love, so in love that he couldn’t help but look over at her again and again as he shared his story, almost amazed as I was that it was real.

I don’t know what to feel about marriage some of the time. Few people seem to take it seriously, and I’m convinced that most people want a wedding more than they really want a life together.

But when I see Bill, I see someone who took his vows seriously, not because they were still married and plugging through, but because he loved her — fully and truly — from the moment he promised to, and cherished the conversations they had and the dreams they shared throughout their lives together. The love part of those vows that people so undervalue, that’s the only part that really seems to matter anyway. It’s the only thing worth having, because when it is experienced fully, honoring and being faithful to and staying with someone through good and bad times is not work, but a natural movement.

These are the kind of people to envy.

They aren’t particularly wealthy or overtly successful, but they value the things that are most important — personal relationships. I don’t care what anyone says, no one down the line will remember what I did or even the kind of person I was. They will know my kinship — who I married, who my parents were, who my siblings were, the children I had. Everything else will be lost, but relationships stand, they build, they branch into limbs of families and of history in a way that events cannot. Their names will always be linked to each other, and they live with the realization that their time together is the most important time there is.

As they were walking out of the store and I told them to have a good time, Bill turned back to me and said, “You know, hun, I’m 68 years old, and on this trip, I’m feeling 28 again. I guess a good woman and a good trip is all you need.”