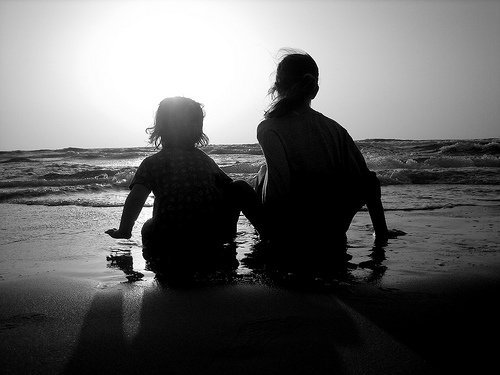 “Because, you understand, they are sisters…”

The Ladies have been trying lately. Trying to make me crazy by the end of summer vacation, I am convinced. They get along for brief periods of time – usually involving some sort mess and mayhem – which intersperse the fighting. Fighting over space on the couch, over which show to watch on television, over who gets to stir the mac and cheese or use the blue crayon. The fact that there are quite possibly a thousand other blue crayons in the box is not the point; the point is not even the blue crayon. The point is that she has it, and she wants it (which “she” is which is irrelevant in this equation). Because she has it, not because it is blue. They are, you see, sisters.

This sisterhood seems to be made both deeper and more complicated by the five year age gap between my Ladies. Every day, Regan comes more and more into her own as a person. And yet, even as the Zen Baby races wildly into her own girlhood, the distance between herself and her sister the Diva Girl becomes more and more pronounced. Sabrina is also growing up, and for every step my younger daughter takes to plant herself more firmly within the boundaries of childhood, my older daughter takes another, leaving them behind. It can be fractious, this ebb and flow between Backyardigans and Hannah Montana, Littlest Pet Shops and Little people, books with boards and books with chapters. But it can be marvellous too. And sometimes, in the spaces in between, there are small moments of grace where the girls come together and they are sisters in more than just name or accident of birth, but in their souls.

Now is one such moment.

The Ladies are sitting together quietly on the couch–a space over which they have warred for the last week. I glance over to see Diva Girl is seated with her legs wide apart, her Zen sister between them. The older one is braiding the younger’s hair. There is silence as they both concentrate on the task at hand, not even aware of my gaze, or of the love for both my children that swells within me at this unexpected sight. They are sisters, and my heart both clenches and expands to fill my chest to see them so.

I think about reaching for my camera, to attempt to capture this moment of connection, but am reluctant to break the spell of sisterhood that surrounds them.

And before I can decide, the spell breaks on its own. Diva Girl issues increasingly imperious (and hauntingly familiar) commands to “SIT STILL!” while Zen Baby, decidedly unzen, wails that she doesn’t want ponies in her hair after all. The noise and the friction builds as their opposite goals rub against each other, and the fighting begins again.

Of course. Because, you understand, they are sisters.

From the blog: Sanity and the Solo Mom by Kimberly Rastin.  Published on  Zen Moments with kind permission from the author

Although his parenting philosophy is not necessarily revolutionary (think “positive discipline”), Gray manages to keep this parenting primer contemporary by weaving in specific challenges of new-millennium families–such as our tendency to be consumer-driven and overscheduled. “When parents learn what their children really need, they are less motivated to create money to acquire things and more motivated to create time to enjoy their family,” Gray writes. “The greatest wealth for a parent today is time.” — Gail Hudson

If a man hasn’t discovered something that he will die for, he isn’t fit to live.