Seeing the lighter side…

“He has said to us that we can keep it!” 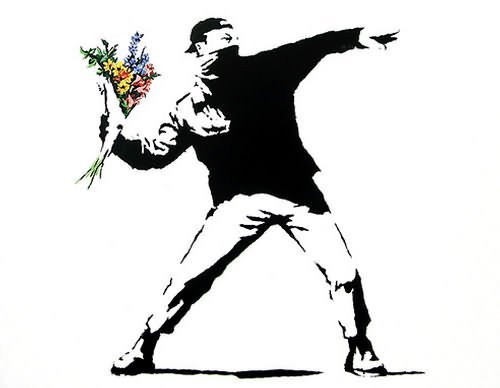 Elusive artist Banksy made his own addition to the collection of Gallery 49 in the British Museum. A drawing in the style of prehistoric cave art showing a caveman with a shopping trolley, appeared alongside finds from 4th Century Roman Britain.

A British Museum spokeswoman said they were “seeing the lighter side of it”. The modern rock art went unnoticed by staff for two or three days. She explained: “It looked very much in keeping with the other exhibits, the explanatory text was quite similar.” 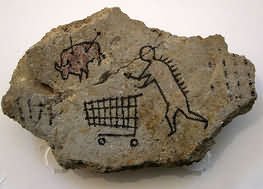 The sign, entitled “Wall art – East London”, read: “ This finely preserved example of primitive art dates from the Post-Catatonic era and is thought to show early man venturing towards the out-of-town hunting grounds. The artist responsible is known to have created a substantial body of work across the South East of England. Most art of this type has unfortunately not survived. The majority is destroyed by zealous municipal officials who fail to recognise the artistic merit and historical value of daubing on walls.”

Banksy is best known as a graffiti artist who has attracted cult status for his often illegal street art. He is most famous for his stencilled images satirising authority and modern society. 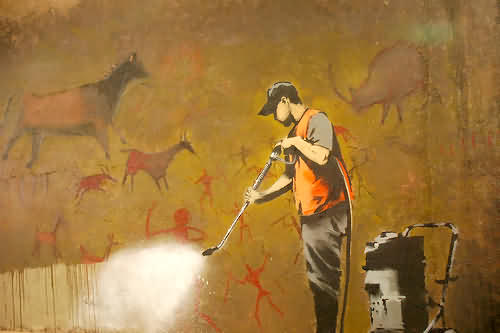 He has also displayed his artwork in the Tate Britain in London – which went unnoticed until it fell off the wall. Banksy’s art has also appeared in four New York City museums – the Metropolitan Museum of Art, the Museum of Modern Art, the American Museum of Natural History, and the Brooklyn Museum – in a single day. The Museum of Modern Art unwittingly hosted an updated version of Andy Warhol’s iconic tin of Campbell’s soup – this time a painting of a cheap brand of British tomato soup.

“Art is the last of the great cartels,” Banksy declares. “A handful of people make it, a handful buy it, and a handful show it. But the millions of people who go to look at it, don’t have a say.” Banksy says he wants to “show that money hasn’t crushed the humanity out of everything… I’m just trying to make the pictures look good: I’m not into trying to make myself look good… and besides, it’s a pretty safe bet that the reality of me would be a crushing disappointment to a couple of 15-year-old kids out there.”

The “Peckham rock Painting” was later exhibited at Banksy’s legitimate show, Outside Institute, in London, with a sign saying: “Kindly on loan from the British Museum”.

The British Museum said they were expecting to add the painting to its permanent collection after the show. “We have loaned the rock to Banksy but we are still in the process of deciding what to do with it. He has said to us that we can keep it.” 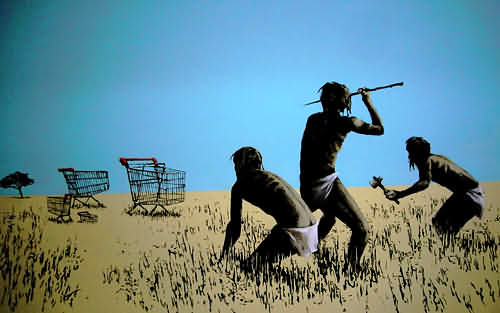 “People are taking the piss out of you everyday. They butt into your life, take a cheap shot at you and then disappear. They leer at you from tall buildings and make you feel small. They make flippant comments from buses that imply you’re not sexy enough and that all the fun is happening somewhere else. They are on TV making your girlfriend feel inadequate. They have access to the most sophisticated technology the world has ever seen and they bully you with it. They are The Advertisers and they are laughing at you.

You, however, are forbidden to touch them. Trademarks, intellectual property rights and copyright law mean advertisers can say what they like wherever they like with total impunity.

Fuck that. Any advert in a public space that gives you no choice whether you see it or not is yours. It’s yours to take, re-arrange and re-use. You can do whatever you like with it. Asking for permission is like asking to keep a rock someone just threw at your head.

You owe the companies nothing. Less than nothing, you especially don’t owe them any courtesy. They owe you. They have re-arranged the world to put themselves in front of you. They never asked for your permission, don’t even start asking for theirs.”

Banksy – from ‘Brandalism’ in the book ‘Cut It Out’

Adapted for Zen Moments from reports and information in The UK BBC News Channel
The Wooster Collective , Banksy and The Peckham Rock Painting 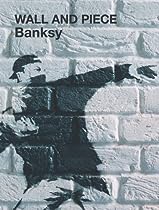 “The collected works of Britain’s most wanted artist.

Artistic genius, political activist, painter and decorator, mythic legend or notorious graffiti artist? The work of Banksy is unmistakable (except maybe when it’s squatting in the New York’s Metropolitan Museum or Museum of Modern Art.) Banksy is responsible for decorating the streets, walls, bridges and zoos of towns and cites throughout the world.

Witty and subversive, his stencils show monkeys with weapons of mass destruction, policeman with smiley faces, rats with drills and umbrellas. If you look hard enough you’ll find your own. His statements, incitements, ironies and epigrams are by turns intelligent and witty comments on everything from the monarchy and capitalism to the war in Iraq and farm animals.

His identity remains unknown, but his work is prolific. And now for the first time, he’s putting together the best of his work—old and new—in a fully illustrated color volume.” Amazon Book Reviews