Magis – A Call to Excellence

“He put his whole heart in to his work…”

Each year in July, the Catholic Church celebrates the feast of St Ignatius of Loyola – the founder of the Society of Jesus (The Jesuits).

The Society has over the centuries been known to produce men of great intellect and vision. Apparently, when seeking permission from the Pope to establish the Society, St Ignatius of Loyola, was asked what particular work they would do. He responded that they would do whatever work no one else wanted to. However, Ignatius added that no matter how insignificant that work might be, it should be done in the BEST manner possible.

Having interacted with Jesuits (and some semi-Jesuits!) since my youth, I have often heard them use the word “Magis” when talking about Ignatuis’ teachings. “Magis” [pronounced “màh-gis”] is a Latin word which means “the more,” and is taken from the motto of the Jesuits, “Ad Majorem Dei Gloriam” (which means, For the Greater Glory of God). “Magis”, is an exhortation to be MORE – in other words, a call to excellence.

We were privileged to watch ‘Magis’ in action at our house recently, when the man in the picture below, Bindhya Chand (affectionately called ‘Chacha’), was sent to work on our new windows.He was right down in the pecking order of the ‘polishers’. His job was to scrape the wood, in preparation for it to be polished. 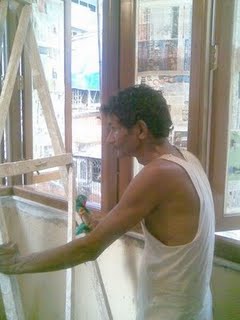 Chacha came in early every morning and set about his work. He had to basically sandpaper the wood. And later he had to do buffing – rub the wood with a soft cloth. Now you can imagine how monotonous this work is. But he put his whole heart in to it.

One afternoon, I realised that he had not had his lunch. When I asked him why, he told me that it looked like it was going to rain and if he didn’t finish his work in time, the wood might get wet!! Frankly, I’ve never seen such diligence displayed for seemingly ‘unimportant’ work. Absolutely amazing!

I believe that every human being is called to ‘Magis’ – to be more, to be the best we can be. The question is how are we responding to that call?

“If you are going to achieve excellence in big things, you develop the habit in little matters. Excellence is not an exception, it is a prevailing attitude.” ~ Colin Powell

Corinne writes: “My purpose in life is to be a source of loving inspiration to the people I encounter. I believe it’s important for me to ‘pay back’ for all the love and inspiration I’ve received from others. I’m a soft skills trainer – who specializes in course design. Over the last two years, I’ve taken to blogging and so far it’s been a wonderful experience.”

Corinne’s blogs: Everyday Gyaan About People And Things That Inspire Me
and Training Gyaan Motivational and Creative Resources for Training, Learning and Self-Development

Kindly contributed to Zen Moments by the Author

Photos: Ghost in the Cathedral by Stuck in Customs
Corinne’s Window

“Dawn is coming, gently and full of prayer…
This is the quiet time, the time of innocence and soft thoughts, the childhood of the day.
This is the moment when the senses are most alive, when a thought, a touch, a piece of music can shape the spirit and color the day.

But if I am not careful – if I rise, frantic, from my bed, full of small concerns…gone will be the openness that comes only to the waking heart…something precious is lost if we rush headlong into the details of life without pausing for a moment to pay homage to the mystery of life and the gift of another day.

…focus the spirit and consecrate the day…A prayer whispered quietly, a gentle touch of a plant or flower, a momentary gaze upon a sleeping child, a second’s stillness in the presence of light…”

It is only when we forget our learning that we begin to know.