It’s OK to Look Back and Cringe

This has been a really important lesson from me as a creative entrepreneur. I think especially as you start out in your career, it can be really scary to be vulnerable, and to put your work out in the world, and you want everything to be a hundred percent perfect. As a creative, I spend a lot of my job and a lot of my time thinking about aesthetics, thinking about design and these sorts of things. But I think this is just as applicable if you are a coder, or whatever you’re doing, whatever type of product you’re building, when you’re starting out in your career you are not going to be good.

So you have to just like get out there and do stuff. This is one of my favourite quotes by the author Neil Gayman: 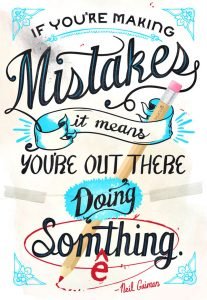 If you’re making mistakes, it means you out there doing something.“

So I think it can be hard sometimes right? Like you just want to wait until it’s absolutely perfect. And I’m not advocating by any means that you should not care very much about you do, and not have real attention to detail.

But I think that having this permission of “No matter what, I’m going to get better and I’m going to look back and cringe on my earlier work” – I think this is really freeing.

It’s one of those lessons that’s easy to listen to and maybe to understand intellectually, but it’s harder to actually put to work in your life as an entrepreneur. And it’s something that I’m still trying to work on.

Susan Koger, co-founder and chief creative officer of ModCloth, shares a lesson she learned since launching the online retailer of women’s fashion in 2003: Your first attempts at something new are bound to be less sophisticated than later versions, which inevitably reflect advanced skills and taste. You may make mistakes, but at least you’re taking action.

It’s OK to look back and cringe – a broader lesson

Susan Koger beautifully describes a lesson and a disposition that, I think, applies more broadly in life.

If we’re interested in learning from life, understanding ourselves and others, it’s a gradual process. But  it’s not a process of becoming more and more skilled – like when you learn to drive a car for example.

With driving a car your skill level increases. What started out as a very stressful and overwhelming process which demanded your full concentration, eventually becomes smooth and second nature. In the UK most cars have manual gearboxes, and so we have to learn to drive “stick-shift”. The process of changing gear involves depressing the clutch pedal and changing gear at the same time, while not over-revving the engine and also paying attention to the road. There’s a lot going on. I remember my driving instructor saying “change gear” and in a clumsy, stressed, awkward motion I managed it, and internally breathed a sigh of relief, and then he said “change down again!” (we were coming to a junction), and I said “but I just changed down”  – I didn’t want to have to do it again so soon as it was so stressful.

In due course, though, with a lot of practice, the whole procedure became much smoother and less of a conscious act. The whole mind-body learns you to do it, and it seems like you subconsciously take all kinds of subtle factors into account – the sound of the engine, the road noise, the motorcyclist coming up behind you and so on. And somehow it’s even possible to talk to the person in the passenger seat. So over the course of time, your skill level improves – you just get better at it.

With learning about life, however, it’s not so straightforward. It’s not so much a matter of getting better and better at something, and refining a skill. It seems to be much more about waking up from the fog you’ve been in, and realising that you’ve been a bit of an idiot, or insensitive, or greedy.

The Buddha indicated that Ignorance (avijja – in the ancient Pali scriptural language) deeply taints our experience, and distorts our perceptions. This is not ignorance in the sense that we actively ignore something, it’s more of a not-realising, not-seeing what is actually the case.

Here’s an example – try this test:

So the process of awakening is an awakening out of the various delusions that cloud our vision, and its a humbling and sometimes humiliating process.

It’s not that “I” get better and better at something, it’s more that I realise I’ve been mistaken all this while.

There was a monk in our monastery who described how he would go to the bathroom in the morning to shave, and he’d turn on the hot water tap (we have separate hot and cold faucets in the UK) , and be looking in the mirror, feeling his stubbly chin, and waiting for the hot water to come through. Waiting and waiting. And then it hit him. He was holding his hand under the cold tap.

This is what an insight is like – not a rational deduction, based on a logical investigation of the situation. A new perspective dawns on you, when there’s a relaxation. Suddenly the whole situation is seen differently – as it is – but in a new light.

This is what self-discovery is like, how the growth of awareness takes place.

And as you wake up from the fog you’ve been in, there’s a slow and gradual humbling of the ego, of realising that I don’t have it all figured out, I am not special, I am not that together, acknowledging that sometimes I have cruel, ugly thoughts and impulses, I get angry, I say and do stupid things – all this stuff happens. It’s all a bit of a mess really (although I hope you don’t notice too much!).

When I look back over 45 years of spiritual practice, it doesn’t look like a track record of achievements. In some ways it looks like a disaster! My memories are riddled with recollections of mistakes I made, stupid selfish things I did and said.

But I think Susan Koger is right:

Having this permission of “No matter what, I’m going to get better and so I’m going to look back and cringe on my earlier work” – I think this is really freeing.

If we are interested in learning about life, about ourselves, about how things are, and we are committed to developing wisdom, then doesn’t this also apply to developing self-awareness too? Aren’t we going to look back and cringe a bit? And isn’t that just the way it is?

So maybe it’s OK not to be so hard on yourself, don’t judge yourself so harshly, don’t be so self-critical. Trust in your intention to understand, to learn, to grow. Have some patience with yourself, some compassion, some self-acceptance, and with all the rest of us who are struggling too.