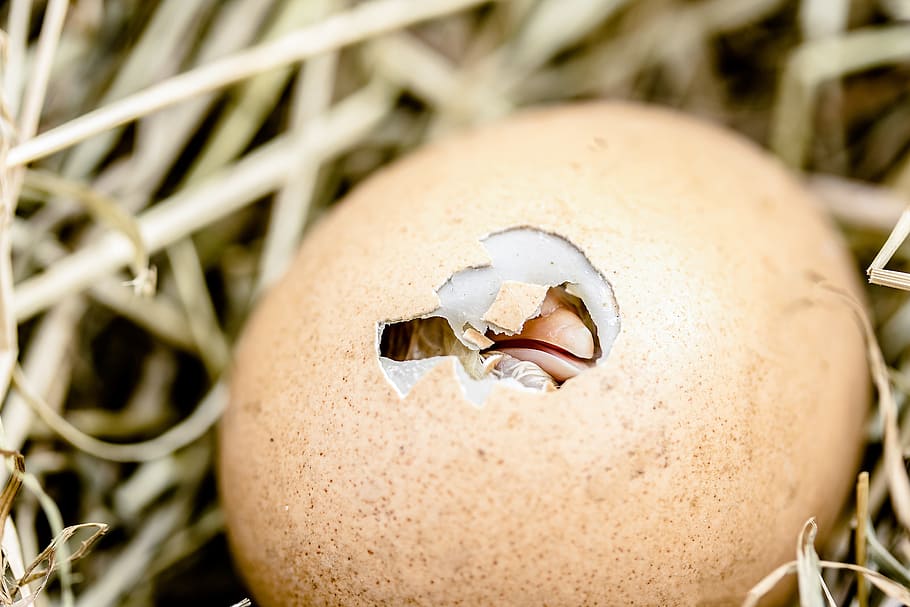 We know our comforts and our discomforts, how to seize what does and to flee what does not comfort us.

We suspect that if we really are powerful beyond measure, that no cocoon would be able to contain us nor any space suit make us free. But – since it seems culturally correct to strive for an excess of insulation or for freedom from the influence of others, we make it our custom to construct arguments against our potency.

Not so with chickens.

My uncle would take us places whenever his brother would disappear on government business. This time, I might have been nine. We’d been to the Catskill Game Farm a couple of times. I had pet all the animals, knew all their smells, the textures of their hair from before. So this time, I was determined to do nothing else until I had seen a chicken hatch.

An egg had already been placed in the last stage of the incubator. I stood before it, mirrored its stillness. A patch of sun had been warming it for about twenty minutes when I noticed it move.

Suddenly, a little chip shot off the egg, and the thing from within that had shot it showed the tip of itself through the tiny hole the chip had left.

No sooner had I realized this was a beak, then it began jack hammering the edges of the hole until there was a crack in the shell.

There was a brief moment of rest, more hammering, more chips, a bigger crack. Another stillness.

One forever later, enough of the shell had been demolished that I could see the chicken’s whole scrawny head. All beak and eyes bobbling on an impossibly skinny neck, pulsing impossibly fast.

The chicken was gasping. Was out of energy. Its eyes were desperate, frustrated, angry just like my own insides.

Gargantuan efforts produced a wing, even more panting. Its eyelid closed slowly. I thought the chicken had died. Then it opened slowly.

No sooner had the eye fully opened, than the chicken began convulsing wildly. The whole egg was rocking and rolling until it rolled over onto the chicken’s face.

“Won’t somebody help this chicken get out of its shell?” I screamed.

At that moment, a large thing draped itself heavily on my shoulder, nearly scaring me to death, becoming a comfort even faster.

“Why not? Can’t you see how hard it is struggling?”

“Yes, son.” He continued. “But if we do that, if we deprive the chicken of its own struggle to get out of the egg, the blood will never get to his wingtips and he will die before ever knowing what it was like to be a chicken.”

We stood silently together. I dried my face with my sleeve. He patted my arm and drew me close to his leg as a granddad might.

“Why not go over there for a bit. The llamas would probably like you to buy them some rye crisp. The camel is fun to ride. Then come back here before you leave.”

I did what he said. By the time we were leaving, the chick had gone from a pathetic mass of goo and determination, to a yellow ball of fluff all bossy and pecking at any bit of its shell it could eat.

Sometimes when my world has developed a crack, I’ve remembered that day, only fifty years ago.

Recalling the chicken’s panic, determination, and effort, it is difficult to imagine that, to justify its violence against its status quo, it needed anything more than a breath of air it couldn’t get from within its cocoon. It certainly required no moral imperative to fulfill its manifest destiny as a chicken. It probably didn’t even know it was about to be a chicken nor did it have to. Yet, it already was.

For the chicken, breaking out was just the next right thing it simply had to do, and could, right here, right now.

It is no less a human’s nature than a chicken’s both to break out of cocoons and to survive the novelty. What newborn human, rigged with nothing more than a cry and a smile, has not impressed the universe to its service?

From the start, Chicks and Babies present as they are – nothing more or less than their authentic, true, selves.

It is easy to see what happens to chickens and people whose natural lives have become constrained by artificial environments. Industrial chicken farming and industrial child rearing have the effect creating mal-adroitness in the practices that nature equipped vertebrates to perform that can enhance the probabilities of their individual and collective survival in the natural world.

Among humans, Civilization rapaciously continues to replace nature as the mother of moment:

At a time when humanity is literally calculating how many decades might remain before it makes its own habitat uninhabitable for human life, we might take a moment to pause.

We, who may yet possess such a luxury as an ability to pause, might recognize that numbers of people everywhere are increasing who are having to trudge a forced march beyond what has ever been their societies’ safe-operating envelopes. Then, might we wonder just how our own shoes will serve us as we cross those lines ourselves.

If we are still capable of empathy at all, we might have a moment of awakening. We may realize that the problem that faces our species may not so much be in discovering how to correct what’s gone wrong in the world as what’s not gone right within ourselves.

Shunryu Suzuki Roshi said many simply wonderful things to his disciples. Perhaps no quote is more pertinent at this moment as when he said:

I hope he would have agreed, that after any of us has

…then each of us will have found and experienced True Self, naturally and at last, as nothing more or less than our inalienably innate power beyond measure, what began most generously and simply as a fact of our very being:

“…one of the top five Buddhist books, ever  ” Elephant Journal

“In the beginner’s mind there are many possibilities, but in the expert’s there are few.” “So begins this most beloved of all American Zen books. Seldom has such a small handful of words provided a teaching as rich as has this famous opening line of Shunryu Suzuki’s classic. In a single stroke, the simple sentence cuts through the pervasive tendency students have of getting so close to Zen as to completely miss what it’s all about.

An instant teaching on the first page. And that’s just the beginning. In the thirty years since its original publication, Zen Mind, Beginner’s Mind has become

He who wishes to secure the good of others, has already secured his own.