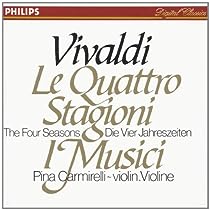 By Octavius
You have reached the peak of excellence for Vivaldi’s ‘Four Seasons’ with this performance. Vivaldi and I Musici can certainly bring one’s soul closer to God as they are both divine, but so are the Stradivarius strings played to perfection by I Musici. This rendition of Vivaldi’s “The Four Seasons” directed by Vittorio Negri and performed by Pina Carmirelli is truly the most divine in its fluid and passionate performance. I’ve studied and listened to classical music for over 25 years and I have heard literally hundreds of renditions of Antonio Vivaldi’s “The Four Seasons.” From Accardo to Zuckerman, I have not heard one rendition that even compares to this absolutely brilliant performance by I Musici and Pina Carmirelli. It is truly the clearest and most passionate performance available to date.

Just know yourself, this is your witness. Don’t make decisions on the strength of your desires.