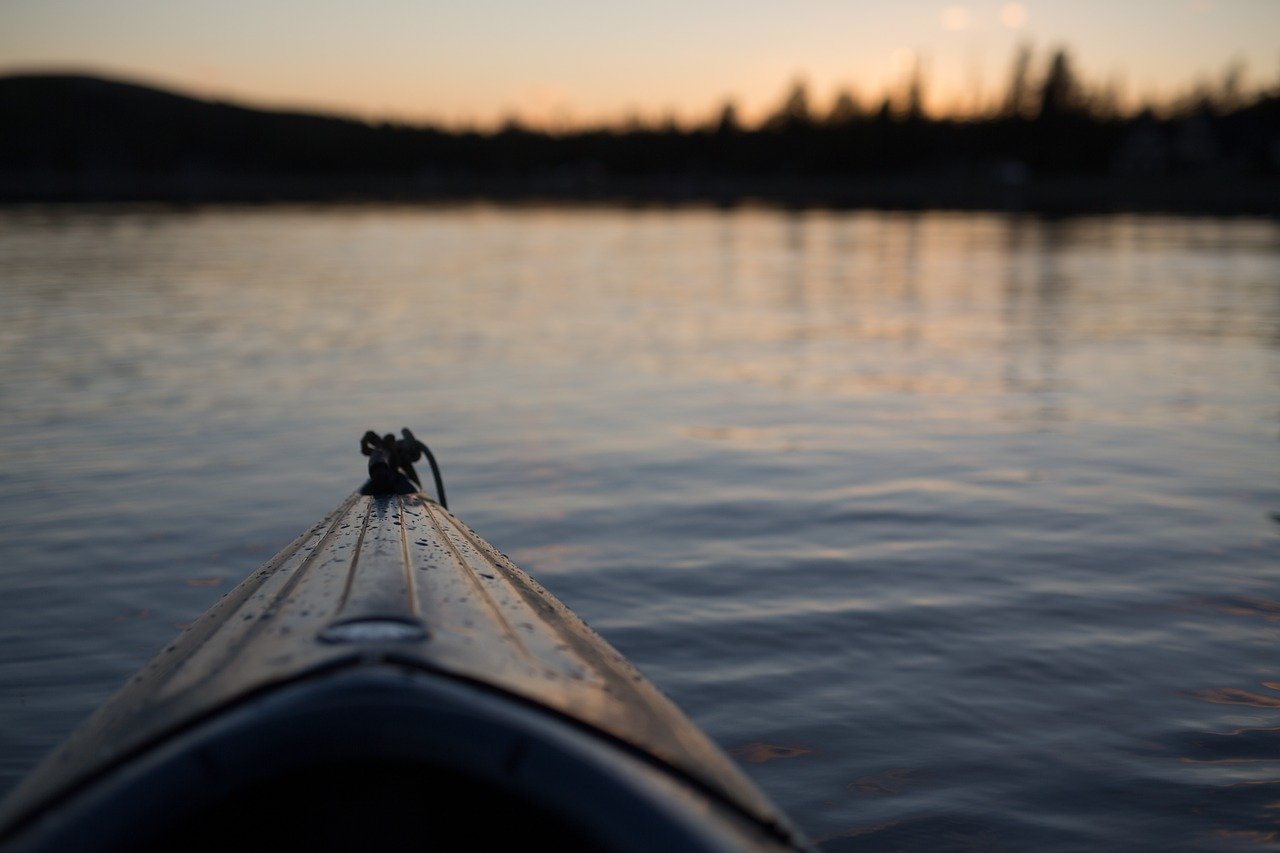 “Remember then: there is only one time that is important– Now! It is the most important time because it is the only time when we have any power. The most necessary man is he with whom you are, for no man knows whether he will ever have dealings with any one else: and the most important affair is, to do him good, because for that purpose alone was man sent into this life!”
― Leo Tolstoy, What Men Live by and Other Tales

The story of a moment at summer camp when I learned what real achievement means.

In the summer of 1975 when I was eleven, I was attending a beautiful sleep-away camp on South Holston Lake in Abingdon, Virginia, called Camp Sequoya.  As a camper I learned how to sail, ski, canoe, swim, shoot a bow and arrow, and how to get along on my own for five weeks without my parents.  Away from school, I could be myself without the labels that followed me around at home.  No one saw me as the smart kid or the smallest kid; I was just accepted for who I was.  It was a liberating, life-changing experience for me and I went for six summers.

The camp built into its activities levels of achievement in order to inspire the campers to devote themselves to mastering certain skills.  In canoeing the highest goal was to be a Commander, which brought with it secret initiation rites and the deliciousness of singing the Commander’s song (“Look up with pride o’er the crest of the tide comes a sight that is warm to behold, dadedededa”).  I longed at eleven to be a Commander.  I had to be able to land a canoe alone parallel to the shore with one “J” stroke.  I had to accomplish a canoe-over-canoe rescue (you paddle to a water-logged canoe and drain the canoe over your own, flipping it over and returning it to the water empty for the stranded paddlers to re-board).  I had to bob the length of a football field, which involved paddling out the length of a football field, storing the paddle, and then standing up on the stern gunnels and bobbing non-stop (stopping meant you had to start over) into shore by bending your knees and swinging your arms.  But the final, ultimate test was the speed test and you could only take the speed test if you had accomplished all the other required feats.  There was a cove in the lake and early in the morning, before the breakfast bell, the Commander wannabe would sit in the stern alone surrounded outside the canoe by as many other campers as possible who would come down and help by pushing the wannabe’s canoe out into the water at the start of the test.  The folks on the other side of the cove included the canoeing counselor who clocked the time it took for the wannabe to get across the cove.  If you could do it in thirty seconds or less, you were a Commander.  You learned that you had made it by the pusher-offers turning you and your canoe over instead of pushing you off for your next try.

In my eleventh summer when I weighed oh probably 60 pounds, I tried thirty-two times to get across that cove in thirty seconds.  The canoeing counselor was Katherine Evans, a long-time camper and then counselor at age twenty, and all business about the Commander requirements.  I thought she was awesome but on those mornings when I would try to achieve greatness, my devotion to her waned a bit as over and over I failed to beat the clock.  On my last try of that summer, I was surrounded by friends standing knee-deep in lake water urging me to give it all I had and I did.  I did my very best with my small biceps but I failed.  No one dumped me into the lake that last time.  I recall feeling some anger at Katherine, thinking that surely after all that work, all that bobbing and landing, all that heartbreaking effort to speed across the cove, surely surely she would let me have it even if my time was thirty-one seconds.  But she didn’t and it was the best thing she could have done.

Katherine’s adherence to the rules taught me that sometimes you give your best effort and you still don’t win.  As frustrated as I was, the underscoring of real achievement and its rewards did get into my head.  The next summer when I was 12, I made it finally to Commanders though I had to repeat all the requirements.  Nothing was sweeter than the moment they turned my canoe over instead of pushing me off again.  I stood up, soaked from head to toe with lake water and feeling on top of the world.  The goal I had reached was much richer for its difficulty and its elusiveness.

These days I wonder if we are sending the right message.  I attended two graduations this past week.  My son “graduated” from eighth grade and my daughter “graduated” from fifth grade.  Back in my day we only graduated from twelfth grade so these graduations seemed more like demarcations of progress than true graduations.

The “keynote” speaker (really, that was his title in the program) at my son’s graduation was also teacher of the year at the school.  I was interested in what such a speaker would say to an eighth grade class moving onto high school.  In sum the speaker told the students to find their passion and to follow it.  He clearly had done this in his own life as he expressed the joy he feels from teaching is so life-affirming and fulfilling that when he gets up every morning he thinks he is going to the beach rather than to a “job.”  I know from the thousands of people I have talked to over the years that the experience is not so common.  It’s hard to ferret out what we want to do and harder still to make it happen.  At thirteen could the eighth grade graduates take that in and use it?  “Follow your bliss” is a pearl of wisdom, a phrase that makes much sense, but true wisdom usually is the product of a roughness in our lives, like a grain of sand that irritates and irritates until it becomes something better and beautiful, something we can look at and say that bit of learning is what came from that hard experience.

My son Avery recently had a drum lesson and his teacher Frank, who is as much a mentor as a teacher, took some time after the lesson to talk with Avery and with me.  Frank is refreshing in his honesty about himself and earnest in wanting to help his students not only with their drumming but also with their lives.  He is unabashedly negative about the music business and though he thinks enough of Avery’s talent to encourage him to take lessons from others and to promote him to teachers at UNC and Duke, he regularly discourages him from dreaming of a life supported financially by drumming.  Frank told him that at thirteen, he was in a fog, doubtful of own abilities, and unable to, as he put it, “find his true North.”  Frank told him to keep all doors open by working hard in high school to preserve the possibility of future goals, to make college entrance within his grasp, essentially to preserve the later swinging of the compass needle to North, wherever North may be. I, of course, cried while Frank was talking, moved mostly by the moment of listening to someone attempt to convey hard-won knowledge out of love and caring for his listener.  I also could not help but think about how very hard it would be for my son, as it is for all of us, to find his true North, his bliss.  I fervently wished for Frank’s words to lodge themselves with Avery as I had hoped when the speaker at his school attempted to convey the same message.

But what strikes me is that telling a child something, particularly while handing them a certificate for finishing fifth grade or eighth grade, is simply not as effective as holding out for the ultimate achievement, be it graduating from high school or canoeing across a cove in thirty seconds.  Certainly when we are young, it is nigh impossible to possess the life perspective that would allow us to take in advice that comes in words.  Even as an adult I have found that it is difficult to impart or receive life-changing advice and have it take hold.

Before we are fully grown (and even after), we should fall down and have to get back up.  We need to give the moment sixty-seconds worth of distance run and fail.   We have to learn that the keepers of the certificates, the jobs, and the college acceptances have real standards.  When it all seems easy, we lessen our efforts.  I recall my father’s words upon hearing me complain that something was difficult, “Well, did you learn something?  Did you try your best?”

Whatever size your bicep is, you have to flex it for all its worth, and if you want something badly enough, you may achieve it but only if you truly meet the standard.  Given the ease with which recognition is delivered these days, I hope I can build into my children’s lives some moments that are grains of sand, moments when they don’t get dumped into the lake in victory but instead have to put down their paddle and walk away defeated but somehow still determined.

Then, when they find their true North, they may get there.

Kindly contributed to Zen Moments by Beth Tillman from her blog
sideglimpses.blogspot.co.uk – Moments of life, glimpsed from the side with a view to the bigger picture.

Only kings, editors, and people with tapeworm have the right to use the editorial ‘we’.