“This is the Cycle of Life and we can do no better than to know and honour it.” ~ Yuli Somme 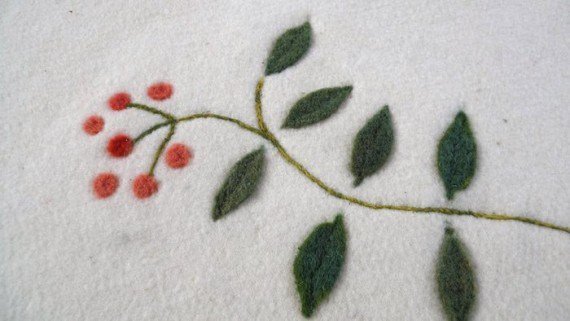 Back in the last century I was a maker of colourful hand-made felt tea cosies, felted seamless jackets and hats, and the occasional wall hanging. As a member of the Devon Guild of Craftsmen, I was visiting schools on the Big Hand Little Hand scheme getting children and young adults involved in making felt, hopefully awakening their minds to the essential human trait of using your hands to unlock your creative potential in a way that schools are hindered from doing.

When I was at school, I’d read that a law of the 17th century decreed that the dead must be buried in wool. The Government of the day needed to keep the wheels of commerce stable and since wool was the most important industry in the UK at the time and death is a certainty, bringing the two together would hopefully keep people employed.

However pragmatic that might be, I found the notion comforting and 15 years ago I made my first shroud, answering a call for an exhibition about sustainable craft practice.
I thought, we just don’t do death in a nice way, we’re bundled away in a plastic bag with a zip for goodness sake, as if we are last weeks rubbish destined for landfill.

Over the last century, people have relinquished essential life skills such as food production, childbirth and the laying out of the dead to the professionals. We have settled into ineptitude without recognising the consequences, which are that we don’t make real choices for ourselves, rather just accept what is offered. The body of the person who has died is hidden from us, brought out in a hard, nondescript box for a standardised ceremony that has little meaning, either for the mourners or the person inside the box. We pay the specialists to keep things neat and tidy to allow us to get on with our lives, but ultimately it denies us the knowledge and experience of the reality of life and death. Our griefs are unhealthily stored away to burst out occasionally in inappropriate ways. How can this be sustainable, and what good does it do to our inner beings?

The ancient process of making felt is very physical, rolling wetted raw wool fibres in an energetic way to make them felt together and shrink, similar to the actions of a washing machine on your best wool jumper. I’d been making big pieces of felt for years and I loved my work but it was very physically taxing and tiring. 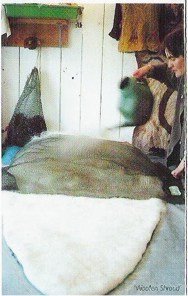 I put the weight of my body into rolling the huge wet roll that was to become the shroud; back and forth for hours and days, because of course the first shroud was not right, nor the second. I sang songs in time with the rolling. The effort released physical energy I didn’t know was there, but something else as well: a catharsis. I was thinking about death, really thinking about a body; my body perhaps, or that of someone I loved decomposing and for the first time in my life it wasn’t scaring me. I can only describe it as an awakening.

I was aware that the grief I had held since the death of my father when I was 5 years old was being teased out from it’s deep seat within my psyche. The pushed-away taboo that death is, or was, for me was being rolled away in my efforts. With every push of the heavy roll, a little more of my inside feelings were released. The equivalent of bashing big cushions in a therapy session but with an end result! And was this shroud for me? Yes, it most definitely could be. I left that question open; after all I was only in my early 40s. I could at last admit, yes, one day I will die, and perhaps someone very lovely will tenderly tuck me into this woolly cocoon and put me in the earth to gently be transformed by a billion tiny mouths into nourishing soil that gives rise to brilliant life.

I was thinking about how humans have broken the sacred and fundamental concept of the Cycle of Life. This was perhaps a Universal Shroud indicating something gentler for our beaten up planet, Earth.
As my shroud went on tour with the exhibition, interesting conversations about life and death arose. I found myself with a commission to make a shroud for a man with terminal cancer. This was certainly a new and strange turn in my career from making tea cosies!

Everything in my work has now changed. I have developed the shroud into what is best described as a ‘soft’ coffin. The Leafcocoon has a sturdy wooden frame encased in layers of felt with padding, supported by six strong handles. The shroud is strapped to the base and further layers of thick felt make up a smooth, soft woolly cocoon, leaf shaped and usually decorated.

Fortunately, a movement largely spearheaded by women to make death and everything associated with it a better passage, is changing attitudes. Many young and not-so-young women (and men too), are busily involved in waking up a generation or two of us who have had stultifying experiences around the death of someone we loved. 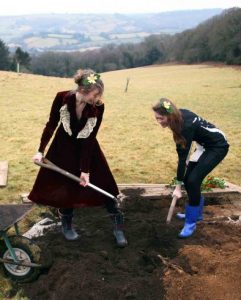 and the Natural Death Centre have helped to encourage better practice in the form of advice, networking and awards. A new wave of funeral advisers help people find what suits them and their families. The internet has made it possible for people to research alternatives, seeking out the professionals that enable rather than prescribe.

I have felt empowered to create a business, Bellacouche, that helps people find other, more meaningful ways of creating ceremony. After my mother’s funeral my sister commented “we celebrated Mum’s life without a hearse, undertaker and even a coffin!” To my surprise my two daughters pitched in to do the actual burial themselves.

I feel reassured that they will carry this real experience with them for the future; a person dies and you bury their body in order to create way for more Life. This is the Cycle of Life and we can do no better than to know and honour it.

Yuli Somme
(Originally posted on Bellacouche – Reproduced with kind permission of the author.)

Yuli says: “I was born in Norway and although I have lived most of my life in Devon, the traditional weaving and knitting heritage of Norway has deeply influenced me since I was old enough to hold needles to knit with.

I trained and worked as a weaver in the 1980’s, some of that time worked as a researcher at Coldharbour Mill Working Wool Museum. At the end of that decade I switched to felt making when the craft was relatively unheard of.

I made my first shroud in 1999, in response to an exhibition entitled “Treading Lightly” – illustrating how makers can work in a sustainable way within their craft discipline.”

You can find out more about her work on her website: Bellacouche.

It’s never so bad that it can’t get good.