The Kindness of a Stranger 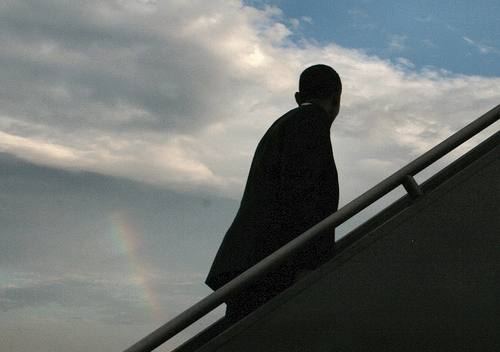 Mary Menth Andersen was 31 years old and had just married Norwegian Dag Andersen. She was looking forward to starting a new life in Åsgårdstrand in Vestfold with him. But first she had to get all of her belongings across to Norway. The date was November 2nd, 1988.

At the airport in Miami things were hectic as usual, with long lines at the check-in counters. When it was finally Mary’s turn and she had placed her luggage on the baggage line, she got the message that would crush her bubbling feeling of happiness.

“You’ll have to pay a 103 dollar surcharge if you want to bring both those suitcases to Norway,” the man behind the counter said.

Mary had no money. Her new husband had traveled ahead of her to Norway, and she had no one else to call.

“I was completely desperate and tried to think which of my things I could manage without. But I had already made such a careful selection of my most prized possessions”, says Mary.

Although she explained the situation to the man behind the counter, he showed no signs of mercy.

“I started to cry, tears were pouring down my face and I had no idea what to do. Then I heard a gentle and friendly voice behind me saying, ‘That’s OK, I’ll pay for her’.”

Mary turned around to see a tall man whom she had never seen before.
“He had a gentle and kind voice that was still firm and decisive. The first thing I thought was: Who is this man?”

Although this happened 20 years ago, Mary still remembers the authority that radiated from the man.

“He was nicely dressed, fashionably dressed with brown leather shoes, a cotton shirt open at the throat and khaki pants,” says Mary.

She was thrilled to be able to bring both her suitcases to Norway and assured the stranger that he would get his money back. The man wrote his name and address on a piece of paper that he gave to Mary. She thanked him repeatedly. When she finally walked off towards the security checkpoint, he waved goodbye to her.

The piece of paper said ‘Barack Obama’ and his address in Kansas, which is the state where his mother comes from. Mary carried the slip of paper around in her wallet for years, before it was thrown out.
“He was my knight in shining armor!” says Mary, smiling.

She paid the 103 dollars back to Obama the day after she arrived in Norway. At that time he had just finished his job as a poorly paid community worker* in Chicago, and had started his law studies at prestigious Harvard university.

In the spring of 2006 Mary’s parents had heard that Obama was considering a run for president, but that he had still not decided. They chose to write a letter in which they told him that he would receive their votes. At the same time, they thanked Obama for helping their daughter 18 years earlier.

‘I want to thank you for the lovely things you wrote about me and for reminding me of what happened at Miami airport. I’m happy I could help back then, and I’m delighted to hear that your daughter is happy in Norway. Please send her my best wishes. Sincerely, Barack Obama, United States Senator.’
The parents sent the letter on to Mary.

This week VG met her and her husband in the café that she runs with her friend Lisbeth Tollefsrud in Åsgårdstrand.

“It’s amazing to think that the man who helped me 20 years ago may now become the next US president,” says Mary delightedly. 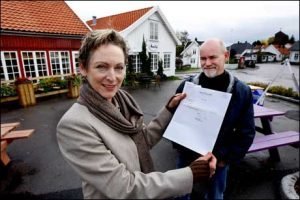 She has already voted for Obama. She recently donated 100 dollars to his campaign.

She often tells the story from Miami airport, both when race issues are raised and when the conversation turns to the presidential elections.

“I sincerely hope the Americans will see reason and understand that Obama means change,” says Mary.

And here she is with her husband and the letter.

This is a story from the Norwegian newspaper VG, the biggest newspaper in the country, from today’s (Sat 4th Oct. 2008) edition. The original, in Norwegian, is here.

Leisha Camden comments: “This is not a big or important story. But it is a nice story and if one is voting for a person, and not just for a political platform, it might be interesting to hear it. Somehow I don’t see this story being covered in American media much, so let’s count this as one blogger’s contribution to the news coverage of the 2008 election”. 🙂
(Leisha says on her blog: “If anyone wants to post this anywhere else, be my guest.)” Thanks Leisha!

Alex Johnson took the picture of Barack Obama ascending the stairs to his plane in Florida.

Alex writes:” I am very happy that Zen Moments used the picture I took of Barack Obama, and matched it to such a wonderful story about him. We all thought the rainbow was portentous at the time. We were there to load the bags on to Barack’s charter jet. When Barack arrived at the airport, he insisted that all of the baggage loaders and the bus drivers get an individual picture with him.

My impression on meeting him in person was of his great compassion and patience.  Some time later he paid a surprise visit to us in a small volunteer office in a poor black neighborhood of Ft. Lauderdale.  Barack arrived in his campaign bus, came into the small office and thanked the surprised volunteers for their efforts on his behalf.  He then shook hands with everyone and exchanged a few words with each of us. Something Barack always says is “thank you.”  Something he rarely says is “me.”

The Audacity of Hope: Thoughts on Reclaiming the American Dream

I didn’t attend the funeral, but I sent a nice letter saying that I approved of it.