Tears in the Rain

“No-one has ever done anything like this for me, lady…” 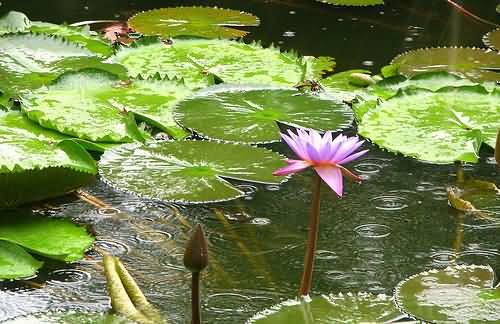 I had a very sad experience on Wednesday night after Yoga. It was about 8.15 pm and I was in a hurry to get back home. Just as the class ended it started to rain heavily, and I was cursing for not having brought an umbrella. I decided to use my yoga-mat as an umbrella and held it over my head as I ran across the road.

Just near the temple entrance I noticed a man sitting in the dark, on the pavement with a torn plastic bag over some food he had in his lap. Obviously he was a beggar, with half a leg missing too! Someone must have given him the food but it started raining suddenly and the poor man was stranded.

Immediately I felt my heart getting really heavy and I just felt so miserable for this wretched soul. I didn’t know what to do. But I was aching from this sight.

Without much thinking I just went up to him and sat beside him and held the yoga mat over us both, so he could continue to eat. I said “kanna kanna” (eat eat!) and he just stared at me in disbelief. My back was getting drenched in the meantime. He just kept looking at me without eating and I could see he was trying to say something and then he started crying, staring right into my eyes.

I was feeling so bad for this man and did not know what else in the world to do and before I knew it I was crying too. I felt so terribly helpless and yet I think to this man, my being there was something to start crying about.

We were both crying like children. What a pathetic life this man was having to live.

Finally after about 10 minutes or so the rain ceased and I said to him to move in to the temple and he was still sobbing and not yet eating!

I said I have to go and he reached out and held my hand in both his hands and said “mata kawuruth mehema deyak karala ne nona” (no-one has ever done anything like this for me, lady) and boy was I weeping or what!

It was 9 pm when I finally got home after a cry in the car.

Zen Moments is grateful for permission to reproduce this moving account, which came from a personal email sent from Sri Lanka.
The writer has requested to remain anonymous.

Emotional Awareness:
Overcoming the Obstacles to Psychological Balance and Compassion

Two leading thinkers engage in a landmark conversation about human emotions and the pursuit of psychological fulfillment. At their first meeting, a remarkable bond was sparked between His Holiness the Dalai Lama, one of the world’s most revered spiritual leaders, and the psychologist Paul Ekman, whose ground-breaking work helped to define the science of emotions. Now these two luminaries share their thinking about science and spirituality, the bonds between East and West, and the nature and quality of our emotional lives.

In this unparalleled series of conversations, the Dalai Lama and Ekman prod and push toward answers to the central questions of emotional experience. What are the sources of hate and compassion? Should a person extend her compassion to a torturer—and would that even be biologically possible? What does science reveal about the benefits of Buddhist meditation, and can Buddhism improve through engagement with the scientific method? As they come to grips with these issues, they invite us to join them in an unfiltered view of two great traditions and two great minds.

Accompanied by commentaries on the findings of emotion research and the teachings of Buddhism, their interplay—amusing, challenging, eye-opening, and moving—guides us on a transformative journey in the understanding of emotions.” Amazon Book Reviews

“A rich feast for the mind… This is a singular meeting of two intellectual traditions—and two remarkable minds and hearts.”—Daniel Goleman, author of  Emotional Intelligence

Your time is limited, so don’t waste it living someone else’s life.