Rumi and Shams – The Power of Friendship

Entering Rumi’s mausoleum in Konya on that early winter morning heralded the beginning of my own rich harvest of his poetry and thought. Here indeed was a man who shared my belief in the power of friendship as a vivifying factor between people of sensibility and complementary insight. In an age when mutual respect and love between people of individual destinies has all but been reduced to a plethora of shallow emotions, the prospect of finding exemplars of Rumi and Shams’ stature lying among the debris of history filled me with joy. I hoped that, in my beginning to know them, they might serve as my guides through the hallowed halls of mystical knowledge that lay before me.

The snow outside in the courtyard fretted white the cobbles where once the two friends had walked. The tomb itself was built over the Garden of the Wise Men where Rumi was first interred. A dome of 16 faces supported by four pillars, it is decorated on the outside with mosaics and on the inside with painted motifs. The wooden sarcophagus, designed by the architect Abdulvahid, is built of walnut on which an inscription from the Qur’an is carved, together with another singing Rumi’s praise:

… here is the resting place of Rumi, Sultan of the Wise, shining light of God illuminating the darkness, an imam son of an imam, support of Islam, a guide of the people who leads them into God’s glorious presence …

In the high dome the sound of a reed flute (ney) fills the still air. Rumi’s dervish hat, placed at the head of the sarcophagus, casts a shadow on the wall behind. Detailed Arabic inscriptions mingle with stylized motifs from nature in the archway above. A brazier makes a rather futile attempt to warm the tomb against the chill outside, while about me pilgrims from all over Turkey pay their respects, softly murmuring their prayers as they file past. All of them, I suspect, harbour a deep longing to experience the bliss of love that this ‘Sultan of the Heart’ so ably expressed in his life and poetry.

It is true that the love Rumi and Shams bore for one another finds its echoes in other memorable encounters between men. The disposition towards ‘giving one’s head’ for a friend marks a high level of attainment in the conduct of human relationships, and is in itself a sign of high cultural achievement.

We acknowledge it as an intrinsic part of the warrior tradition, whether it be between Achilles and Patroclus in The Iliad, or two friends who happened to die for one another in the trenches of the Somme. The idea that death hangs as a sword above the quality of friendship, ready to rend it in two at the moment of apotheosis, lends a poignancy to the human predicament that no words can properly express.

The word ‘friendship’ derives its meaning from the old Teutonic word frijojan, meaning ‘to love’. Its pre-Teutonic origins, however, lie in the word priyo, meaning ‘dear’ – a word which further finds its root in another Teutonic expression, frio, meaning ‘free’. The Old English equivalent for ‘free’ is freon, meaning ‘to love’, from which our modern word for ‘friend’ is derived. Thus we are confronted with a spiritual condition generated between people which is linked to the idea of love and freedom, two qualities perfectly reflected in the lives of Rumi and Shams.

At dawn a moon appeared from the waves
And ascended, gazing down at me. Then,

Like a falcon snatching a bird in flight,
It snatched me up and flew away.

When I looked up I no longer saw myself:
Into that moon my body had eased, by grace

Of the soul in which I travelled, moon-driven
Until the secret of God’s revelation halted me.

Nine spheres of Heaven had merged in that moon;
And the sea washed over the ship of my being,

Breaking against me in waves. Again Wisdom’s
Voice boomed; as it happens so it occurs.

At every foam-fleck of the ocean a figure
Emerged and slowly disappeared, just as

My foam-flecked body, receiving a sea-sign,
Melted within and slowly turned to spirit.

Without the regal power of Shams of Tabriz,
Holding the moon or becoming the sea are dreams. 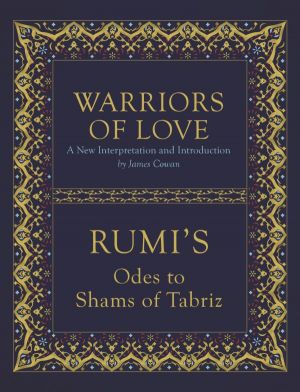 In 1244 a man wrapped in a coarse black coat entered Konya and so into the life of Islam’s most celebrated poet and mystic: Mevlana Jalaluddin Rumi. A wanderer and spiritual vagabond, Shams of Tabriz proceeded to wrestle with Rumi’s soul. Warriors of Love is a fresh interpretation of a selection of 49 poems which were written by Rumi as metaphors for his love for God as well as for his friend Shams, the Wild One.

James Cowan is a distinguished poet and novelist. His bestselling titles include A Mapmakers Dream and A Toubadour’s Testament. His books have been published in the US, UK, Australia, Germany, France, Holland, Poland, Italy, Greece, Switzerland, Croatia, Mauritius, Spain (Spanish and Catalan), Argentina, Brazil, Korea and Japan.

In Warriors of Love, a long introduction on the life and times of Rumi and his friendship with Shams, James Cowan explores the historical facts of their encounter, Sufism, The Mevlevi Order of Dervishes, the new dimension that Shams brought to Islamic spirituality and the importance of friendship as a true path to God

Jalal ad-Din Muhammad Rumi – known simply as Rumi – was a 13th-century Persian poet, jurist, theologian, and Sufi mystic. Iranians, Turks, Afghans, Tajiks, and other Central Asian Muslims as well as the Muslims of South Asia have greatly appreciated his spiritual legacy in the past seven centuries. Rumi’s importance is considered to transcend national and ethnic borders. His poems have been widely translated into many of the world’s languages and transposed into various formats.

In 2007, he was described as the “most popular poet in America.”

Rumi’s works are written in Persian and his Mathnawi remains one of the purest literary glories of Persia, and one of the crowning glories of the Persian language. His original works are widely read today in their original language across the Persian-speaking world. Translations of his works are very popular in other countries. Wikipedia

Shams-i-Tabrīzī was a Persian Muslim, who is credited as the spiritual instructor of Mewlānā Jalāl ad-Dīn Muhammad Balkhi, also known as Rumi and is referenced with great reverence in Rumi’s poetic collection, in particular Diwan-i Shams-i Tabrīzī (The Works of Shams of Tabriz). Tradition holds that Shams taught Rumi in seclusion in Konya for a period of forty days, before fleeing for Damascus. Wikipedia

It’s being here now that’s important. There’s no past and there’s no future. All there is ever, is the now.