“He looks up, eyes widening in quiet disbelief …” 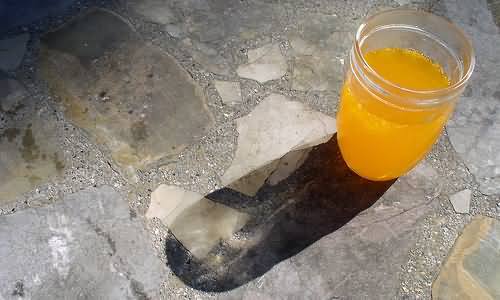 He’s an old, dirty man, propped uncomfortably on a low wall along the few-inch space where red metal fence meets concrete. He’d pried open a box of rice-and-sundry and was shovelling hard-to-come-by morsels into a grateful mouth.

In the crazy heart of Port of Spain, Trinidad’s capital, she skirts around his pile of multi-coloured crocus bags, a treasure trove of all he owned in this world except dignity.

Up ahead the taxi drivers gesticulate under a heavy, grey sky – “An’ I had was to tell he! He self!” – a woman sits bored, waiting to dip into coolers of ice, a girl politely asks if perhaps one would like to buy used school books for the children.

She stops to ask the bored woman to dig into coolers of ice for a bottle of water, and by the way, a small bottle of juice? Yes, that one. And straws. Two.

She follows the red fence, comes upon the old, dirty man, smiles and stops.

He looks up, eyes widening in the quiet disbelief of a man used to asking, eking, finding, surviving, grains of rice clinging to his lips and beard.

“Thank you,” he says from down in his throat where surprise stifles reaction.

She smiles. He settles the drink on the ground, balances the straw on his lap, his meal as complete as her day now was.

Kari Cobham is a reporter at a daily newspaper in Central Florida. Her work has appeared in the Orlando Sentinel, SHE and Caribbean Beat magazines.


Kindly contributed to Zen Moments by the author

After the Ecstasy, the Laundry: How the Heart Grows Wise on the Spiritual Path

“Meditation on the mat is wonderful but we all need to know that life continues after we go home, Thanks for making this so vivid and allowing us to see that even the deepest practitioners still have to deal with everyday life.”

“Jack Kornfield, one of America’s most beloved teachers of meditation, assures us that enlightenment does occur on the spiritual path but warns that it is not the end of the road. Bringing his thoughts to a personal level, Kornfield looks up many of the notable spiritual teachers of our times (Buddhist, Christian, Jewish, Sufi, etc.) and presents extended quotations of their trials and epiphanies. These anecdotes are woven together with fables and ruminations from Kornfield’s own decades-long experience as a practitioner and teacher, creating an image of the spiritual life as challenging, multidimensional, rewarding, and, yes, mundane…” Amazon.com Review

There is a transcendent power in example. We reform others unconsciously when we walk uprightly.