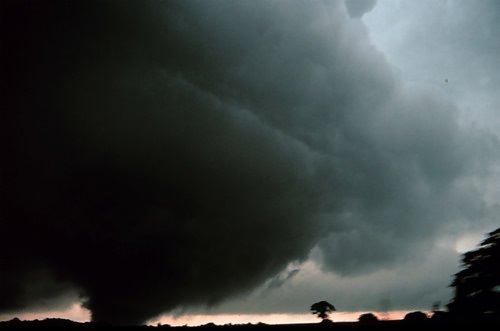 “How can something so sad be beautiful at the same time?”

On Feb.2.2007, a series of tornadoes ripped through Volusia and Lake Counties in Central Florida, killing 19 people, injuring more than 50 and destroying hundreds of homes. This is their story through the eyes of an affected journalist.

It’s the kind of call you hope never to get as a reporter, but inevitably do. And when the bureau chief makes that call at 9:48 a.m., three hours before you’re due in, it’s time to haul you-know-what.

While I slept quietly through the night, 30 miles away in my city – the city I covered – the city I was in every day having lunch and calling officials – a series of violent tornadoes were ripping homes and livelihoods apart. They left behind 57 injured residents; about 500 destroyed and damaged homes; more than $80 million in damage in my county; 19 people dead in a neighboring county and a quickly-declared state of emergency.

It’s one thing to watch destruction from way up high on TV through the softening lens of a cameraman, but picking through rubble among people left with nothing is a whole other painful ballgame.

The damage started off small at first: the odd tree branch here, an orangeless orange tree there. But as I moved further through this neighborhood, past the orange-vested workers clearing trees and righting power lines – I was awestruck.

And then there were the people. The people who went to bed comfortably last night with mundane worries, who now crawled through debris into the coming dawn to face a day with nothing left. Nothing but splintered wood and scattered belongings and lost people searching for things they’d never get back. I wanted to cry.

Instead, I spent hours trudging through hopeless faces and interviews, watching expressions fall when they realized I wasn’t with the city or the county or FEMA coming to bring aid. I was just a reporter with a pen and pad and watery eyes saying sorry and drawing their stories.

With a looming deadline and other dispatched journalists calling in to share their own shock and pain, I put down my pad for a moment and helped an old skydiver load his things onto a flatbed truck. I tucked my gas money into the palm of a surprised mother so she could feed her wind-battered children.

Sometimes in this job we have to wonder: When is it OK to reach out? When do we leave the pen and the cameras behind, to help? I had to tell myself that if it weren’t for us, the world wouldn’t know what happened there that morning. Like the men hauling trees and patching roofs, that was our role. And I’m not always OK with it.

I’ve never before seen the mass despair of so many people, who’ve lost everything all at once. Suddenly it was no longer about how to make that car payment on rent week. It was about how to feed the kids and where to put them to sleep.

But I also saw people coming together, helping neighbors: people who’d also lost it all, sharing food and car space, helping to right vehicles. How can something so sad be beautiful at the same time – because of the kind of people we can be?

In the grand scheme of things we are such ants. Mother Nature can do with us what she will and there isn’t a damned thing we can do about it. That is, except pick up the pieces; reach out a hand; offer shelter and help figure out what kind of day tomorrow will be.

Kari Cobham is a reporter at a daily newspaper in Central Florida. Her work has appeared in the Orlando Sentinel, SHE and Caribbean Beat magazines. She first wrote and published the story: Uprooted” the day after the tornadoes on her blog: A Mi Ver.
Kindly contributed to Zen Moments by the author

“These are the images that demonstrate the heart of weather’s primal draw, and that hold the power to make weather fanatics out of even those of us whose first instinct is to run.” The New York Times

“Issues of global warming continue to be relevant, and every day brings front-page stories about the weather, generating new research, raising even more questions and possible solutions. Storm Chaser is a mesmerizing look at some of the catastrophic consequences of our planet’s increasing temperature, captured by an expert in the field…

From extraordinary tornadoes to historic hurricanes, remarkable floods, geomagnetic storms, and magnificent lightning, Reed captures not only the mercilessness of America’s sometimes deadly weather, but also the magnificence and meaning behind the tempests. ”  Amazon books

My theory is that all of Scottish cuisine is based on a dare.