“This gift of kindness made my day and I will never forget it!” 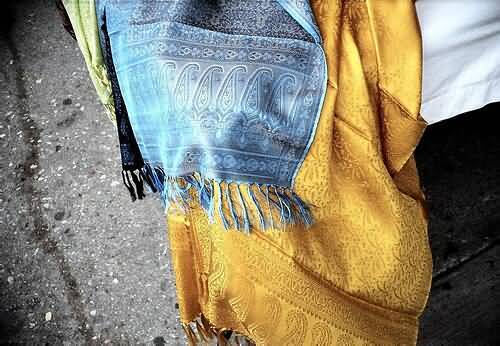 Two guests of mine last week were an Indian couple from NYC, who I had never waited on before.

I am always complimenting my guests, and I always pause to ask them how they are before I ask them what they need. I immediately admired the lady’s shawl, which was a Pashmina – 70% cashmere, 30% silk.

The man, a kind gentleman, told me he sells them, and then proceeded to ask me if I would like to buy one (he had several in his vehicle outside).  I told him that while I would love to, I could not afford it (I have been struggling financially, like most people in Westchester, due to the poor economy).

He said that was quite all right, not at all rude towards my blunt confession.

I then asked the gentleman if he had a card. (Though I doubted I would ever call if he did, as I would probably not be able to ever actually buy one – he did not know this, but I was just being polite.) The gentleman said that he sold these tailor-made shawls door to door in the city. I thanked him for his information, and they were extremely polite throughout the visit, and thanked me for my service, telling me I was “great”.

Then, at the end, as I came to deliver their check, the lady produced from out of nowhere: A Pashmina! It was blue and white and had a beautiful pattern.

She was giving it to me. They had never met me before, and were giving me a present!

I was flabbergasted, and accepted the gift gratefully, almost not knowing what to say, and clasping their hands warmly in thanks. They returned the gesture, pleased that I appreciated this act of random kindness.

I have never before received a gift from a complete stranger. They again thanked me for their service before leaving. What nice people! People of such warmth in this world are rare.

This gift of kindness made my day and I will never forget it!

by Sara Lawrence Kaplan. Sara works as a part-time waitress at Applebees in Mt. Kisco, New York. She is also a part-time Grad School student at Mercy College, studying for a 2 year degree in Teaching, Adolescent Education grades 7-12.

Random Acts of Kindness
By The Editors of Conari Press 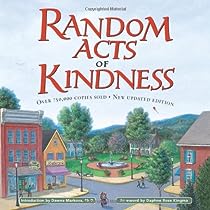 “Random acts of kindness can be as simple as talking to strangers, as inconspicuous as allowing people in a hurry to get ahead of you in line, as generous as doing unsolicited chores for people in need, as philanthropic as paying for a stranger’s dinner or sending books to a sick child.

Random acts of kindness can be as fulfilling as climbing a tree after a runaway child, and then leading the child down, or as planting a tree that others will enjoy decades letter. They can be forbearance in the case of a minor traffic accident or of a personal debt. They can be meaningful advice given, compassion and empathy shared. They can be tips given in appreciation of the server instead of the value of the service. They can be the willingness to let others act on misunderstandings despite some element of personal sacrifice by the actor. The endless examples of the ways people can treat others with random kindness are well sampled in this book.” Amazon.com Review

Depend not on fortune, but on conduct.