The Train to Kyoto

“Everything comes down to you and one moment and one action…”

There is something so simple yet so profound that it’s quite possible we find ourselves missing it completely. Morgan spent many successful and raucous years playing in major rock bands. And then one day on an express train from Osaka to Kyoto he was hit by the awareness of this: something so simple.

Well, I had an ambition, to own a really fancy car – my friend had the same car. Finally I got enough money to get the fancy car. I knew I’d get lots more girlfriends if I got this fancy car…. Wrong!

I can understand enjoying a fancy car, just because you like driving, but to enjoy a fancy car because it’s going to get you more girlfriends – mistake, you know – ulterior motives – dodgy, those things…

The car was a Bentley and he was in his early 20s.

Morgan is a musician and has performed and toured with rock bands such as Mott the Hoople, Love Affair and Queen.

He has an ability to move on in life, without attachment to past projects.

I know people who have had very very big success – I won’t name names – but very famous rock stars. And once they’ve had this success they’re grimly hanging on. Now people don’t imagine that these guys are doing that, but I feel that with some of them, that they’re grimly hanging on to maintain that success at the level they’ve gotten accustomed to. And life would be hell if they started to sag…

Might you be grimly hanging on to past achievements?

I’d been in rock bands for, like, nine or ten raucous, successful years. It just seemed like… that’s not appropriate for me any more. Almost immediately somebody called me and said “would you like to join my band?” It was a bit of a well-known band, and I said “I don’t really feel like being in bands, thanks” and I wasn’t quite sure what I was going to do, but it felt good to say No at that point.

Could you say ‘no’ without knowing what lies ahead?

There was a time in my career, a few years later, where I moved out of music totally, and sort of floated around the world a bit, and I picked up odd jobs. Everything I turned my hand to, like selling ice cream once, I found utterly fascinating, because you meet all these people, from all walks of life, of all ages and nationalities, and you get to talk to them, and they’re always happy, because they’re buying ice cream, for a start. And secondly, you get to talk to people you may never normally get to meet, so you have a different relationship with the world, than, say, being a travelling musician, and being on stage a lot of the time, and it’s like, well – one’s bigger and more glamorous and richer than the other, but in terms of sheer interest, there’s no difference – you find interest wherever you go…

Could you move from a rock stadium to an ice cream stand?

I’ve had a few times in my life when there’s been a period when I’m basically broke and out of work and floating, and that floating thing has become less and less menacing to me, or scary. And there I think I can make myself ready for something new to come along. When one door shuts, another one opens pretty quick, and if you can deal with the limbo in between, you’re onto something….

From where you stand, would you notice a door opening?

I remember one night, I was on a train going from Osaka to Kyoto, it was rush hour train, one evening, and I had this camera with me and I decided to take pictures of the lights going by at night, using very long exposures so you get these lines on the film, which I find very beautiful. It required physical precision, you had to hold the camera very still, and you had to look very carefully so things were right, and there was that nice physical feeling of doing something very carefully, and also there was a tremendous emotional thing of “Wow, I wonder what this is going to turn out like” it was really exciting, and there was a mental concentration of “maybe with the next shot I’ll try this ….we’ll see what’s coming” And it was like the mind and the body and the heart were all totally into it, and that leaves room for nothing else…

How often are you totally absorbed in what you’re doing, leaving room for nothing else?

And that was quite a stunning moment for me to realize that because of some rather odd creative thing I’d been doing for the previous half hour, it just filled me up so much that it just overflowed to everybody, and I felt amazingly peaceful and amazingly caring of everyone.

Now you can’t buy that… you don’t buy that by getting a number one hit record, and thinking “oh I’m rich now, now I can take care of everyone, love everyone”.

Everything comes down to you and one moment and one action. And the concentration and the dedication you give to that action is where, not success, but where fulfillment lies, because if you’re totally into something, there’s no room for greed, jealousy, envy, frustration, you’re so into something. And that can be playing a concert in a stadium, or it could be preparing a little ice cream stand for the customers – you’re so into it that it’s almost like time stops, and there you are, and you’re doing your best and you’re giving it your utmost, and to me there’s no better success, because those moments are so peaceful as well, because when you’re totally into something there’s no room for anything else…

Might peace be hidden in your ability to pay full attention?

The Train To Kyoto starring Morgan Fisher appeared on  Soul Biographies – an adventure in biographical short film. Reproduced by kind permission of the  film-maker Nic Askew – creator of monday9am tv 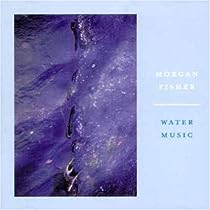 Listen to samples from “Water Music”

“Soft, dreamy music inspired by water. As relaxing as sitting by a stream on a summer’s day – or watching the rain…”

“An archetypal British eccentric whose extensive career spanned from pop to glam to ambient music, Morgan Fisher was born in London in 1950. He first garnered notice playing Hammond organ with the 1960s pop band the Love Affair, scoring a Number One U.K. hit in 1968 with “Everlasting Love.” After buying an early synthesizer, Fisher turned to electronic music, and created a series of scores for experimental films; he also mounted Morgan, a ‘classical rock’ band fronted by former Queen vocalist Tim Staffell, and briefly tenured with the Third Ear Band.

In 1973 Fisher signed on as the pianist for Mott the Hoople, and continued with the group — sans Ian Hunter and Mick Ronson — under the abbreviated name Mott. Later rechristened the British Lions, the group disbanded in the late 1970s; given his musical background and sartorial splendor — trademark white suit, homburg and waxed moustache — Fisher seemed an unlikely patron of punk, but inspired by the movement, he established his own independent label, Pipe Records, and turned to producing records for artists including the Dead Kennedys, Jayne County and Cherry Vanilla.

After recording 1980’s Slow Music, an early ambient collaboration with avant-jazz saxophonist Lol Coxhill, Fisher adopted the name Hybrid Kids to produce 1980’s A Collection of Classic Mutants, a mock compilation album purportedly made up of cover versions of classic pop hits performed by unknown new wave bands. In fact, the entire record was recorded by Fisher and his friends, including Jah Wobble; soon he mounted Miniatures, another compilation — this one legitimate — comprised of 51 one-minute recordings from talents ranging from Robert Wyatt and the Residents to the Damned’s Dave Vanian and XTC’s Andy Partridge.” from Amazon

Freedom is the will to be responsible to ourselves.