“Oh well – another adventure… I thought…” 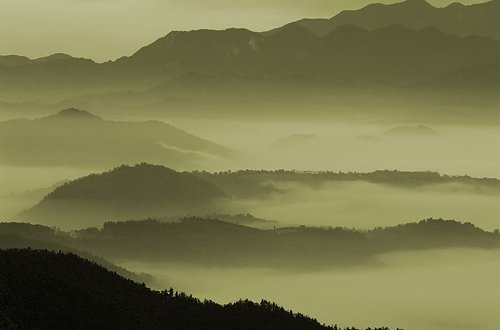 I had just finished high school, and was desperate for fresh air, sights new to my eyes, and experiences that would restore my soul, enliven it with vigour. Living in Mexico City, it always is a gift to drive for four hours and visit the beaches, beautiful as they are. But I longed for isolation, for growth and perspective, so heading for the southern misty mountains of Oaxaca seemed like the best place to go, and it was within budget.

After almost a week of travelling, finally I was on the back of a pickup  truck,  sitting next to a couple of old farmers who would recognize  their land as we drove higher into the mountains, and tell tales about  their cattle, their great-grandchildren, their dead…  and would then  fare me well and descend.

I wasn’t too sure which was my own stop, but I then reached a pueblo nestled in thick fog, and knew I had arrived. I found a cabin to stay in, and its owner soon brought me some hot chocolate – night was approaching, and it was certainly getting chilly. It occurred to me to take a stroll around this town, and beneath the fog-filtered sunlight, cold and white, I walked through brightly painted houses, electric pinks, canary yellows, cornflower blues and seafoam greens – the magic of this place was especially alive in the plentiful murals on some of these walls, depicting ancient traditions of the Mixtecs.

I returned to the cabin, and quite suddenly the fog lifted, and my eyes were overwhelmed by the sheer height of this town, everything for miles could be seen, and all was below, like a playground ready to be explored. I thought about doing this the following morning. That night, I would just stare at stars showering from the sky above me, the one always hidden above the city’s blanket. An old man strummed his guitar beside me, the fire, and its crackling warmth. Freedom.

I was awakened by Felipe, the cabin’s owner, and he offered me some breakfast – a huge (and I mean HUGE) tortilla with spiced beans, string cheese and beef steak, called a tlayuda. Some hot chocolate, and I was ready to descend the mountains.

It all began with imagination. And ended with peace.

It was so simple, and that was its beauty. A field of flowers would become a jungle to me, and I would let go, and become the characters in the stories I had read and seen in films when I was a child. Those were the days when I would ceaselessly pretend, and my eyes would be fascinated by anything, not mattering if it were new or familiar. I kept walking down through the forest, and a fantastic tree would bloom into my enemy, and picking up a stick I would wield my sword, shattering it against the mighty foe, and finding a piece of rotting bark with fungi so fantastic growing on it, that I would mark it instantly as my magic wand, and would defeat my nemesis, laughing all the while.

An enormous maguey would then be my meditation refuge, embracing me with its leaves and allowing me to rest before I would cross through the mighty canyon, made by the rivers of fall, now dry in summer, where all the temptations of my life, my sins and regrets, all the darkness I was escaping from would tempt me to give up on life. And I  would cross this valley, rotten sticks shattering as I ran,  and I tripped and fell and rolled, mud on my clothes… laughing all the while, that same laughter I had not heard in years! The laughter I made as a boy! And then I fell through, and landed in a clearing.

Quiet. Only the wind made a sound through the leaves… and a magnificent view of the mountains still below. It was all still a game to be enjoyed.

It began with imagination, and I played my games with compassion. And down there I found profound peace, where for hours, I sat and contemplated.

And then, once again, it was getting dark. I looked up and saw that I had come down some three or four miles from the pueblo and hot chocolate.

“Oh well – another adventure…” I thought… 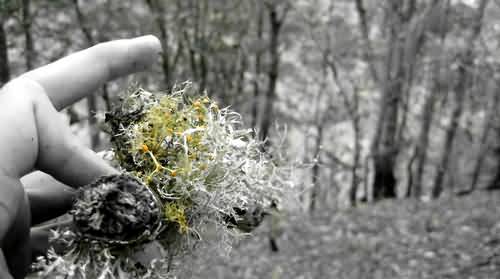 – As I was descending the mountain, I had my camera and journal with me, and it was natural for me to record certain moments in ink or image. This image is one of the moments I mention in the story. It depicts the fallen piece of a tree branch, completely covered with moss and fungus. I found this collage of life fascinating, having such a small and intricate scale, but being so rich with complexity and texture. I couldn’t help but take a picture of it, holding it with my other hand, with the forest as its backdrop. Later on, I would wield this spectacular object as my imaginary “magic wand”.

By Sergio Beltran Garcia
Sergio writes: “Currently, I study architecture here in Mexico City. I am extremely grateful to be studying this, as I sincerely feel that no other activity could satisfy my constant need of creative output – photography, painting, songwriting, writing poetry and short stories, and creative design are among my dearest hobbies. Nothing puts a great smile on my face as does assisting communities or individuals through the arts.”

The Once and Future King

“The Once and Future TH White”

“This book is in my lifetime top ten list… Its pages are full of wisdom, humor, mysticism and hard life, an unbeatable combination. I call the story “a hopeful tragedy.”.. it’s hopefulness lies in King Arthur’s ability to continue deepening, learning, reaching for the goodness that he still believes is in every person.

Someone said that The Once and Future King was the “Harry Potter” of its day. While I love the Harry Potter series, Rowling is no T.H. White. Her writing is a serviceable yeoman’s march compared with White’s kingly, profound, sometimes soaring performance…”

“… children’s fantasy as it should be, a delightful read for both kids and adults.”

“…contains all the exuberant life and melancholic truth one could ever hope for. Not to be missed.”

“…the glory of this book is that it is a world unto itself, an enchanting, vivid, colorful, humorous, poignant, and precious world, one that tells us, of course, much about our own. It is a tale from a dream-England that every Anglophile in their heart loves. The story is full of poetry and laughter, high feeling and goofy humor … I hope it is never lost. Whenever I read the last pages, I turn around to read the first ones again, because I never want it to end. It is T. H. White’s gift to a humanity that bemused and troubled him but which, in the end, he must have loved, to have left us all, the whole world over, this wonderful legacy drawn from the very core of his own being.”
Amazon Book Reviews

A happy life consists in tranquillity of mind.