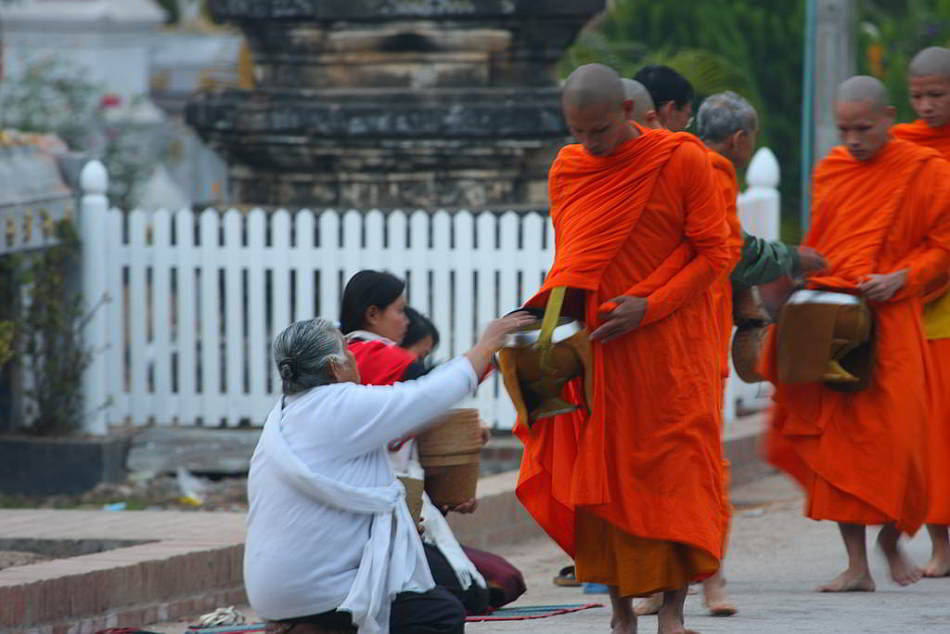 “No thanks, I don’t need anything right now… was like shutting a door in their face…”

I learned a lot about receiving when I was a monk.

I lived as a Buddhist monk without money for 17 years – where everything I consumed (apart from water and toothpaste) actually had to be put into my hands – I couldn’t go shopping for myself, or raid the refrigerator. We could only eat between dawn and noon, and weren’t allowed to store any food. It was an amazing thing – a whole system designed to help you to let go and be with life as it unfolded, and let go of pulling to get this and pushing to get rid of that.

Learning to live monastic life with some understanding and balance took many years, but when it was lived with grace and dignity it was beautiful.

The Buddhist monastic rule was set up this way by the Buddha – so that the monks would always be dependent on the lay-people for their sustenance. We weren’t allowed to grow food either. So the tradition was that every day you’d go out at dawn with your alms bowl, and the villagers would be waiting as you walked silently through their village to drop a small ball of rice into your bowl, or a banana or piece of dried fish, as you passed by. In this way you’d gather enough to eat for the day.

This meant that the monks had to live in a way which embodied the teachings of the Buddha – they had to be dignified, serene and calm and exemplify the Buddha’s teachings. Otherwise the lay-people wouldn’t feed them.

So it gradually dawned upon me that these people who came to the monasteries, sometimes every day they would come, sometimes every week or once a month, they did so to connect with their own religious aspiration, to give expression to their own yearning for Truth – however that manifested for them. And one very tangible way they did that was to ask you “Venerable Sir, is there anything you need?”

Now monks were also not allowed to ask for things – you couldn’t just say “we’ve run out of this, could you get me that?”. You had to wait until someone made invitation. When someone said “is there anything you need?” you were then allowed indicate what your needs were.

In truth we lived in great abundance. People gave so much to the monasteries we almost always had too much stuff – we would give away soap and toothpaste, towels, cleaning products, rice, the things we just had too much of – we’d give it away to hospitals and charities. So it wasn’t often that you needed anything.

In this situation, I noticed that some monks, when asked this “Is there anything you need?” they would say “No, not really, thanks – I don’t really need anything…” Like most of us they’d been brought up with this feeling that it’s good to be self-sufficient, and not be wasteful. If you have everything you need, then why ask for more?

But to my mind, it didn’t quite work like that. There was something else going on.

When someone asked that question, they were asking for the opportunity to participate in your life as a monk, and to connect more profoundly to their own spiritual aspiration, through associating with you – who were living the Buddha’s teaching full-time.

So if they asked that question “is there anything you need” and you said “No thanks, I don’t need anything right now…” it was like you were shutting a door in their face, and they’d feel a bit rejected and denied the opportunity to participate in your life as a monk.


So when I saw that, I realised that it wasn’t about me and my needs – it was about something bigger. And my part in this was to enable my life to be used by them as a conduit to the spiritual dimension, and I could be generous myself by always welcoming that gesture and allowing it to be consummated.

In fact there were always things we collectively needed – such as postage stamps, or razor blades. So even if I didn’t need these things myself,  I had an answer I could give them:  “well – I could use some stamps, and some razor blades would be very helpful…” and you could see that this is just what they wanted – an opportunity to go off to seek out and buy these little things, and then come back and make their offering. And if you took the trouble to open that door for them, they would be uplifted and grateful for the opportunity to serve, to give, to connect.

So whenever I received something in this way, I would always make sure I made use of the thing they had given – even just a little bit – just one postage stamp or a razor blade – or if I was given a tee-shirt, I would wear it once before washing it and putting it into the communal store for someone else to use at some stage. Consummating their act of generosity felt important – so that when they said “how was the tee-shirt?” you could honestly say “oh, it’s really nice, I’ve been wearing it” (rather than pretend, or say “oh, I just put it into the stores…”)

I think in Western cultures we so much emphasise our independence and individuality that it gets way out of proportion – we hate the idea of dependence somehow, and yet we are totally interdependent – participating in a constantly changing dynamic matrix of exchanging – giving and receiving all the time. Sure, the mail man gets paid to deliver the mail, and the bank teller gets paid to do her job, but with just a little extra attention these ordinary transactions with people (whether you are the mailman, the bank teller, the mailman’s customer or the bank’s customer) can be beautiful – it just takes attention and a little kindness – and we all know this! But how easily we get into righteousness when things are not up to our expectations….. sad really.

Money itself is just a symbol for human energy – so when you start to see all these transactions as ways in which we exchange our human energy, then you can consider “how do we lift this up and dignify it, make it beautiful…?” It doesn’t take much to say a kind word, express appreciation, or acknowledge what we have received from someone, or make it possible for them to help us. When we fail to do this we miss many opportunities.

I lived for a few years firstly in Japan, then latterly in Thailand and Sri Lanka, and in Eastern cultures they tend much more readily to perceive themselves not so much as individuals first, but as part of something bigger, part of a company, part of a family, part of a club, primarily as belonging, as being plugged into a network – organically. And when you are part of something larger than you, you are more aware of having duties and responsibilities towards others, and because others perceive you as belonging, there is a sense of their reciprocal commitment to you which you are held by and supported by. And they seem to have so much joy and fun in groups – always teasing each other in a very affectionate and friendly way and helping one another.

Being in a group of Thais, sometimes it felt like they were acting as one organism – a bit like watching starlings swirling as they fly in formation – it was amazing to see human beings just doing this together, energetically connected, silently flowing with what was happening, rather than the hard-edged western way of “Who are you to tell Me what to do?”. Of course it wasn’t always like that, and westerners can harmonise too – it’s not so black and white. But giving and receiving are the fundamental things we do with each other all the time, and nobody much talks about how receiving can be beautiful too.

So I would go out on the morning alms-round in Sri Lanka and Thailand, and it really affected me. As I walked at dawn, barefoot, enveloped in my saffron robes, eyes downcast, going along the empty city streets, stopping here and there as people came up wanting to put things into my bowl, it was a very moving experience to be able to touch the lives of these people in such a beautiful way.

Receiving with grace is beautiful. It allows an opportunity to someone who wants to give, and it blesses both the giver and receiver, and in some small way it beautifies the world.

Recommended Reading from Zen Moments Bookstore: Food for the Heart: The Collected Teachings of Ajahn Chah

“Renowned for the beauty and simplicity of his teachings, Ajahn Chah was Thailand’s best-known meditation teacher. His charisma and wisdom influenced many American and European seekers, and helped shape the American Vipassana community. This collection brings together for the first time Ajahn Chah’s most powerful teachings, including those on meditation, liberation from suffering, calming the mind, enlightenment and the ”living dhamma”. ” Amazon Reviews “..

Ajahn Chah’s humorous, analogy-laden narration of his tradition’s Buddhist practice. A practice that is basic and almost reductionistic, similar to modern Zen makes these teachings accessible to beginners and appealing to serious practitioners. More troubling is the lack of context for Ajahn Chah’s talks: no dates or details are given. For instance, readers who encounter the injunction to renounce familial ties alongside a consideration of how spousal sexual relations may conform to the Four Noble Truths may be perplexed if they do not know that Ajahn Chah tailored his talks to the needs of both monastics and lay practitioners on quite separate occasions and in varying contexts. … However, this is a valuable collection of the Thai Buddhist master’s thoughts.” Copyright 2002 Reed Business Information, Inc.

Being busy does not always mean real work. Seeming to do is not doing.