A Gift from the Setting Sun 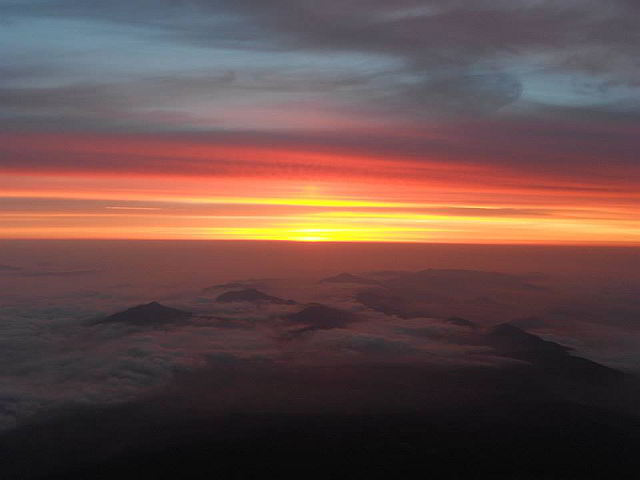 “You watch it all, until the last sliver of golden light vanishes…”

Having taught meditation for many years, I’ve found that one of the most common questions I get asked is: “How do I get started?”

People often begin with a book and try to teach themselves. But in the beginning you don’t really know what you should be doing. And people often give up.

So, usually the best way is to go to a regular class, where you have some guidance and you get the support of practising with other people. If that goes well, then maybe take a weekend retreat, to go a little deeper.

But, when I got going myself, I didn’t do any of that.

I dived in with both feet – total immersion. I enrolled on a 10 day course – which was really intensive – 10 hours a day of meditation, rising at 4am, no talking, the whole thing.

I guess I figured that I’d be sure to learn something about meditation – why pussyfoot around?

For the first three days we were just told to concentrate, during each one hour sitting, on the breath at the entrance of the nostrils, and focus on the subtle sensations of the air going in and out.

Well, for a restless 21 year-old, it was all a bit too much.

It was all I could do to sit without moving, let alone still my mind, but I stuck with it.

On the fourth day the second half of the technique was taught, where you were to take this supposedly heightened concentration, and direct it around the body, part by part, examining the sensations in the body, and most important of all, noticing that they were changing.

The point of it all was to see deeply and clearly that every sensation, every experience, every thought, every emotion is changing. Nothing stays the same, from one moment to the next. So what is Real?

I applied myself to it as best I could, and to an extent I got the point. In one sitting my knee started to ache and then to really hurt, and instead of squirming around and trying to change posture to ease the pain, I stayed with it, and directed my attention right into the centre of the discomfort. After a while, something shifted – the pain, which had been throbbing and burning, suddenly broke up and turned into free flowing energy.

I couldn’t believe it – it had seemed so solid, so real. Truly – the Buddha was a genius. Truly – whatever arises passes away.

But it was hard. Sitting there on my aching backside for hour after hour, my mind wandering back to my nice warm girlfriend, left behind far away at home, dreaming about food, planning my future, fantasising about this and that, and ever trying to bring the mind back as it flitted here and there.

By day seven, I’d reached my limit, I’d had enough. I thought “well, it’s been pretty interesting, I’ve learned a lot, but this is just about all I can take”.

So I decided to leave.

I had it all figured out.

I’d wait until afternoon tea-time, have a cup of tea, then walk down to the teacher’s residence and tell him I was leaving. “Thanks – it’s been really good, I’ve learned a lot, but I’ve decided to return home now. I’ve got some important things I need to take care of…”

So I packed my things, sat and drank my tea in silence with the others, and then went outside to go down the path to the teacher’s hut on the other side of the compound.

As I came around the corner, the October sun was setting over the lake in the distance.

Like many of the retreatants, each evening, having had a cup of tea, I had taken to sitting in the garden and watching the sunset.

And here it was, just about to set.

I stopped – torn between watching the sunset and getting on with my plan.

So I stopped and sat and watched the sun for the last time, knowing that I would soon be going to see the teacher, and before long I would be back home.

Now when you really watch the sunset, it takes quite a while. If you’ve ever noticed, people will sometimes stop and watch it, but when the sun is maybe three quarters over the horizon, they become restless, and they turn away, looking for the next thing…

Well, on retreat there is time. Time to be, time to settle, and time to drink in the whole experience. So you sit and watch, as the sun sinks little by little over the horizon, until the last sliver of golden light vanishes. And then you watch as the golden clouds gradually turn pink and the light fades. You watch it all, in all it’s glory.

And I did. I watched it all, like every other evening. It was so beautiful.

But when the sun had set, I sensed that something strange had happened. Something wasn’t there, something was missing.

The impulse to leave had gone. I just felt calm.

And then it dawned upon me…

Of course – even this – this overwhelming desire – this too, having arisen, passes away…

A New Earth: Awakening to Your Life’s Purpose
by Eckhart Tolle

The highly anticipated follow-up to the 2,000,000 copy bestselling inspirational book, The Power of Now

“With his bestselling spiritual guide The Power of Now, Eckhart Tolle inspired millions of readers to discover the freedom and joy of a life lived “in the now.” In A New Earth, Tolle expands on these powerful ideas to show how transcending our ego-based state of consciousness is not only essential to personal happiness, but also the key to ending conflict and suffering throughout the world. Tolle describes how our attachment to the ego creates the dysfunction that leads to anger, jealousy, and unhappiness, and shows readers how to awaken to a new state of consciousness and follow the path to a truly fulfilling existence.”

That hurt we embrace becomes joy. Call it to your arms where it can change.